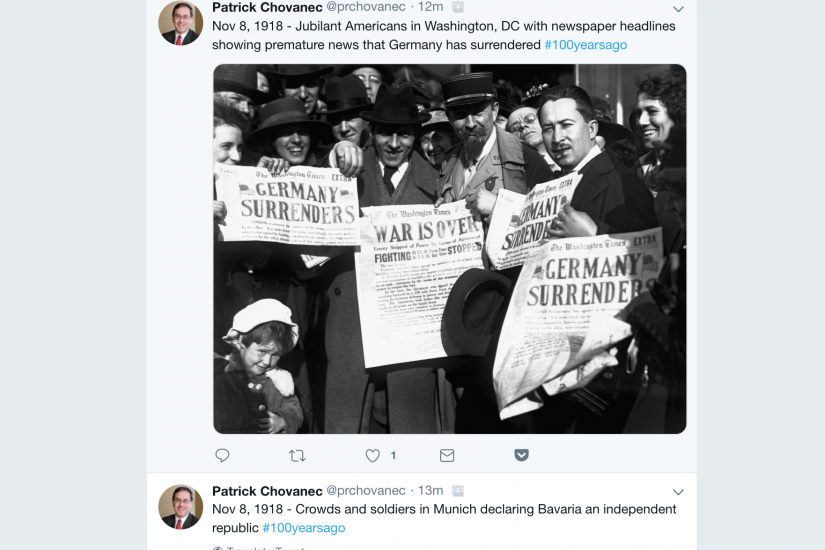 Four years ago, I went to war. Like many of the people whose stories I followed in my daily “live-tweets” on World War I, I had no idea what I was getting myself into. What began as an impulsive decision to commemorate the hundredth anniversary of Austrian Archduke Ferdinand’s death at the hands of a Serbian assassin, in June 1914, snowballed into a blood-soaked odyssey that took me—figuratively and literally—from the rolling hills of northern France, to the desert wastes of Arabia, to the rocky crags of the Italian Alps, to the steel turret of a rebel cruiser moored within range of the czar’s Winter Palace in St. Petersburg, Russia. And like the men and women who actually lived through it, now that the Great War is ending I find myself asking what, if anything, I’ve learned from it all.

In the American mind, World War I typically occupies an unimpressive place as a kind of shambolic preamble to the great good-versus-evil crusade of World War II, a pointless slugfest in muddy trenches for no worthy purpose, and no worthwhile result. Its catchphrases—“The War to End All Wars,” “Make the World Safe for Democracy”—evoke a wry and knowing chuckle. As if. But the war I encountered, as it unfolded day by day, was far more relevant, passionate, and unpredictable.

Posting daily newspaper clippings and photographs, found mainly in books and online archives, I began to see the Great War as a kind of portal between an older, more distant world—of kings with handlebar mustaches, splendid uniforms, and cavalry charges—and the one that we know: of planes and tanks, mass political movements, and camouflage. It snuffed out ancient monarchies in czarist Russia, Habsburg Austria, and Ottoman Turkey, and gave birth to a host of new nations—Poland, Hungary, Czechoslovakia, Syria, Iraq, Jordan, Lebanon, Finland, Estonia, Latvia, Lithuania, Ukraine, Armenia, Azerbaijan—that, in their struggles to survive and carve out an identity, continue to shape our world today. The British declared their intent to create a national homeland in Palestine for the Jews.