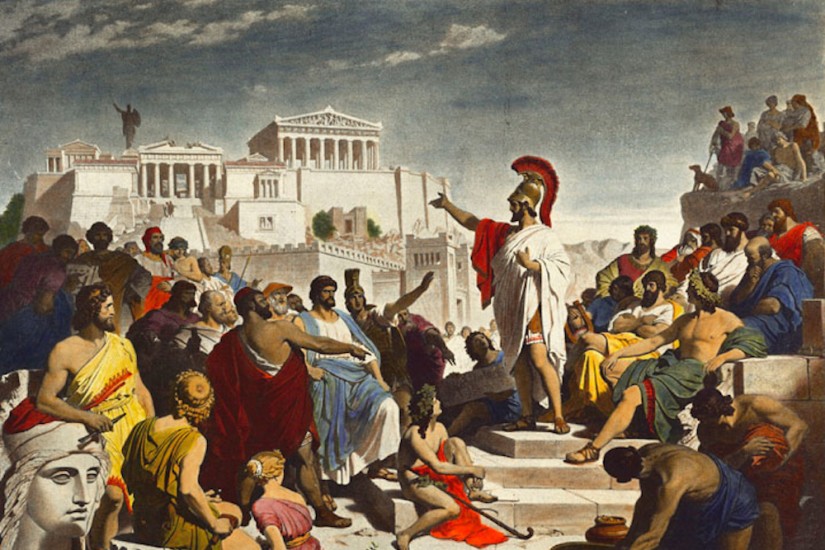 On the morning after the 2016 presidential election I tried to distract myself by reading some pages of Thucydides that I had assigned for a class the next day, and found myself reading the clearest explanation I had seen of the vote that I was trying to forget. In the third book of his History of the Peloponnesian War, Thucydides describes the outbreak of civil war on the northern island of Corcyra in 427 BC:


There was the revenge taken in their hour of triumph by those who had in the past been arrogantly oppressed instead of wisely governed; there were the wicked resolutions taken by those who, particularly under the pressure of misfortune, wished to escape from their usual poverty and coveted the property of their neighbors; there were the savage and pitiless actions into which men were carried not so much for the sake of gain as because they were swept away into an internecine struggle by their ungovernable passions.

The closest thing to a consolation that I found in the election was the catastrophic failure of almost every attempt to predict the outcome by using numerical data, instead of interpreting the passions that provoked it, as Thucydides interpreted the conflict in Corcyra. The most confident pre-election pollsters proclaimed themselves 99 percent certain of the result that didn’t happen. Even the least confident predicted exactly what did not occur.

Everyone who reads Thucydides knows him as the most profound and convincing historian of empire, not only in his own age but also in his explicit and implicit predictions of later ages. One of his great themes is Athenian exceptionalism and the moral and military failures that inevitably issued from it. Early in his book, he reconstructs or invents the funeral oration spoken by the Athenian leader Pericles to commemorate those who died in the first year of the Peloponnesian War, with its brilliantly inspiring praise of Athenian democracy in its full flower, prospering and triumphant through its voluntary self-control, its mutual responsibility, its reverence for the law.

Then, three sentences after the end of the oration, Thucydides, without making a point of the devastatingly subversive turn that his history is about to take, refutes almost everything Pericles said, everything that was self-deceiving and hollow. In the summer after the oration, Thucydides reports, Athens was afflicted by the plague, and its democracy collapsed into “a state of unprecedented lawlessness.” Those who survived cared only for “the pleasure of the moment and everything that might conceivably contribute to that pleasure,” and “no fear of god or law of man had a restraining influence.” Self-satisfied virtue is easy in prosperity, less so in crisis.