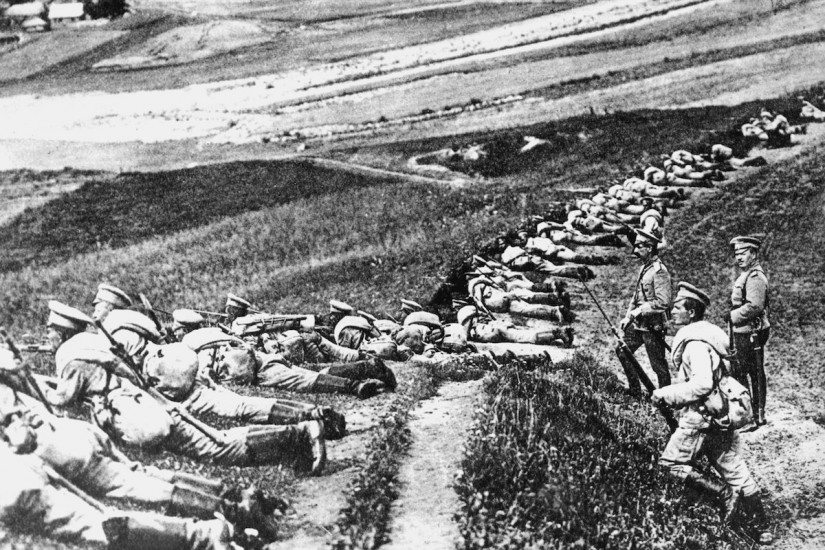 Russian infantry in position at the beginning of World War I in 1914.
AP Images

Miklósik is snoring away. It’s not as cold as last night, although the sky is clear. The moon is a little hazy, though. I look at my trusty watch. Every tick shortens the time I have left.

The sound of movement from the right; suddenly, a shot, and another; then hell breaks loose. I can’t hear my own shouts.

“Cease fire! Cease fire!” roars the adjutant, in a frenzy. “Who gave the order to fire?”

Impossible to say. Perhaps a weapon went off in the hands of some soldier whose nerves were at breaking point, and that set off the entire the front line, like a landslide. Including me.

He holds his head in his hands. “We’ve shot our own men.”

The Royal Hungarian Twentieths and the Thirty-Fourth Kassa Regiment were in front of us…Horror!

Miklósik’s voice: “Maybe it was the Kassas I heard talking in Slovak.”

Lucky we didn’t fire. Frozen silence. Even the crickets have gone quiet.

“I can hear something, like a sawing noise,” says Miklósik. He crawls forward cautiously. After a short while he returns. “There’s another foxhole about fifteen or twenty paces ahead of us. There’s a man lying on the edge. It’s his throat rattling.”

“We ought to bring him back here, but then what are we going to do with him? Or we should call for a stretcher bearer.”

“Who’s going to find a stretcher bearer now? He’ll be dead anyway by the time they find him. His throat’s shot through. He can’t speak.”

“Take two of the men with you and bring him back here. Maybe the stretcher bearers can find their way here.”

“Ensign, sir, if we start a lot of to-ing and fro-ing, we’ll have the Russians firing at us.”

“But we can’t just leave him there!”

“He’s there from yesterday’s fighting. His own lot have left him there. He was there already when we got here. We just couldn’t hear him, with all the crickets and the shuffling about.”

Horrible! Listening helplessly to the gurgling of a dying man! I should speak to the adjutant. I can’t leave the unit, and if I send a man off to report, I’m not likely to see him again.

“Take him some water!”

He stands, unnecessarily, and creeps forward in a low crouch. Soon he returns.

“He’s not saying anything now. I’m not sure he’s still alive.”

He settles down into his hole and pulls his cape over himself. Five minutes later he’s fast asleep. Happy man! I ought to learn from him.