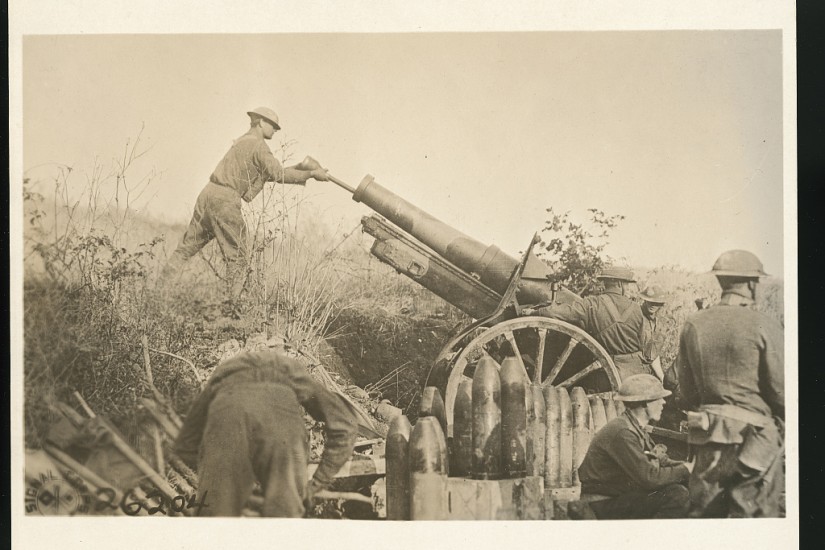 American 155 mm artillery cooperating with the 29th Div. in position on road just taken from the Germans. Bat[tery] A 324th artillery, 158[th] Brig[ade] in France / Signal Corps.
Library of Congress

In 1914, Europe maintained a precarious balance. Nationalism, political rivalries, and imperial ambitions strained the system of military alliances that had long provided stability but also divided Europe into two competing, armed camps. When Serbian nationalists, angered over Austro-Hungarian rule, assassinated the Archduke Franz Ferdinand of Austria on June 28, 1914, a crisis ensued. By the end of October 1914, Germany, Austria-Hungary, and the Ottoman Empire united as the Central Powers against France, Great Britain, and Russia as the Allies. Each country believed war could further its national interests, but each also saw itself as fighting a "defensive" war for national survival.

The Great War, as the 1914–1918 conflict came to be known, became truly a world war as it drew in Japan, British colonies in the Pacific, and European colonial holdings throughout Africa, Asia, and North America. Meanwhile, wary of embroiling itself in the conflict, the United States initially remained neutral and pursued the profits of international trade while protecting its interests at home and in the Pacific. World War I raged around the globe for almost three years before the United States officially entered the fight on April 6, 1917.

Echoes of the Great War: American Experiences of World War I examines the upheaval of world war as Americans confronted it—both at home and abroad.The exhibition considers the debates and struggles that surrounded U.S. engagement; explores U.S. military and home front mobilization and the immensity of industrialized warfare; and touches on the war's effects, as an international peace settlement was negotiated, national borders were redrawn, and soldiers returned to reintegrate into American society.

With the most comprehensive collection of multi-format World War I holdings in the nation including those materials gathered and preserved by the Veterans History Project, the Library of Congress is uniquely positioned to tell stories through the words and images of those in the seats of power as well as lesser-known participants whose lives were shaken by the Great War. Featuring newly digitized footage, some not seen for nearly 100 years, Echoes of the Great War makes vivid this turbulent time in our nation's history.