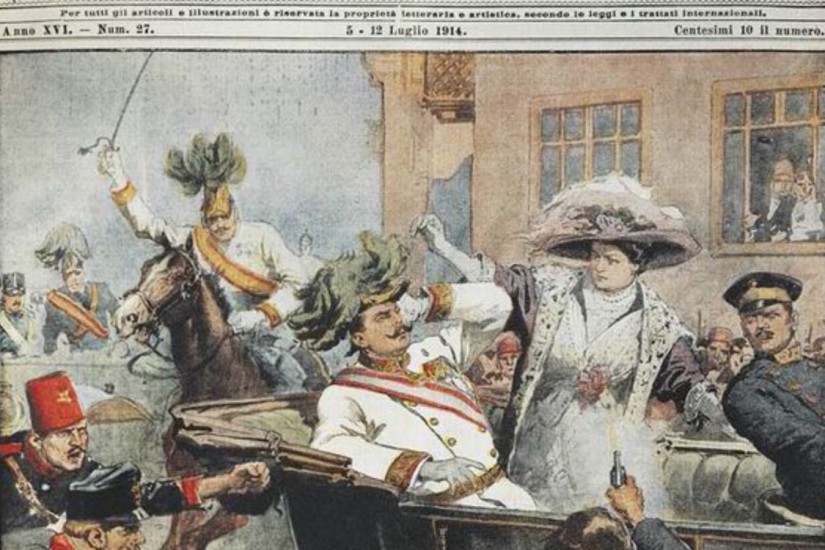 The assassination of Archduke Franz Ferdinand of Austria, as illustrated in the Italian newspaper Domenica del Corriere, July 12, 1914.
Wikimedia Commons

June 28, 1914, Sarajevo, Bosnia. The Archduke Franz Ferdinand, heir to the multinational Habsburg realms, resplendent in the dress uniform of an Austrian cavalry general, but also absurd in his plumed headdress, was shot at close range by Gavrilo Princip, a local student dropout obsessed with the Serbian national cause. Sarajevo was one of history’s most purple passages: there was the drama of bungled security and hamfisted conspiracy; spectacle and gore; the play of intention and chance; the clash of generations and civilizations, of the old monarchical Europe and the modern terrorist cell.

But of course the Sarajevo assassination captivates posterity for its consequences. Piqued in its prestige and fearful of the threat to its status as a great power by subversion fanned from Serbia, the Austro-Hungarian government delivered an ultimatum to its obstreperous little Balkan neighbor, demanding a say in the management of its internal affairs.

Russia stepped in to protect its Serbian clients; the Germans supported their Austrian allies; the French marched to fulfill their treaty obligations to Russia; Great Britain honored its commitment to come to the aid of France. Within five weeks a great war had broken out. At the very least, this is a gripping tale. Sean McMeekin’s chronicle of these weeks in July 1914: Countdown to War is almost impossible to put down.

Thus was unleashed the calamitous conflict that, more than any other series of events, has shaped the world ever since; without it we can doubt that communism would have taken hold in Russia, fascism in Italy, and Nazism in Germany, or that global empires would have disintegrated so rapidly and so chaotically. A century on we still search for its causes, and very often, if possible, for people to blame. In the immediate aftermath of war that seemed clear to many: Germany, and especially its leaders, had been responsible; the Austrians too, as accomplices, in lesser degree. The Treaty of Versailles made this official, as the victorious powers there spoke of a “war imposed upon them by the aggression of Germany and her allies.” This was the notorious guilt clause used to justify severe “reparation” payments stretching far into the future. It was a widespread view, and ordinary Germans might have shared it if the vanquishers had not gone for the premise of collective responsibility, which undermined attempts to build a fresh German regime untainted by the past.