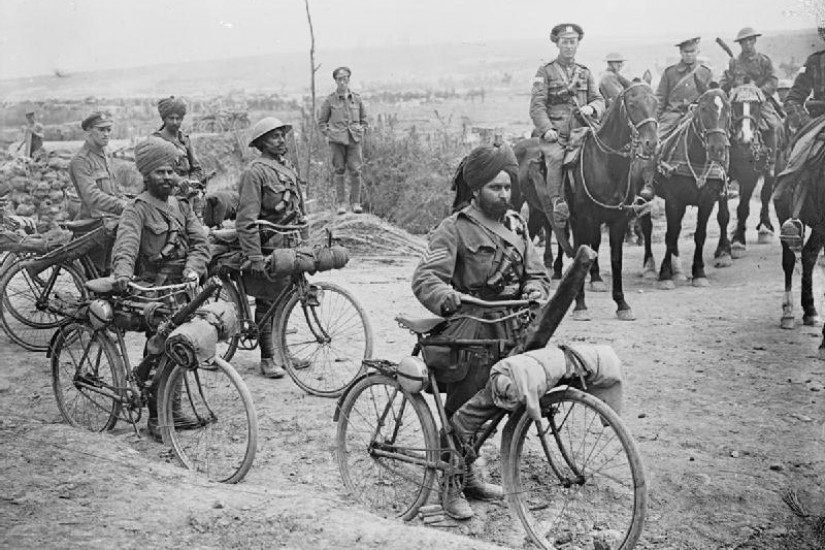 Indian troops at the Battle of the Somme. (1916)
Wikimedia Commons
…

Nearly a century after first world war ended, the experiences and perspectives of its non-European actors and observers remain largely obscure. Most accounts of the war uphold it as an essentially European affair: one in which the continent’s long peace is shattered by four years of carnage, and a long tradition of western rationalism is perverted.

Relatively little is known about how the war accelerated political struggles across Asia and Africa; how Arab and Turkish nationalists, Indian and Vietnamese anti-colonial activists found new opportunities in it; or how, while destroying old empires in Europe, the war turned Japan into a menacing imperialist power in Asia.

A broad account of the war that is attentive to political conflicts outside Europe can clarify the hyper-nationalism today of many Asian and African ruling elites, most conspicuously the Chinese regime, which presents itself as avengers of China’s century-long humiliation by the west.

Recent commemorations have made greater space for the non-European soldiers and battlefields of the first world war: altogether more than four million non-white men were mobilised into European and American armies, and fighting happened in places very remote from Europe – from Siberia and east Asia to the Middle East, sub-Saharan Africa, and even the South Pacific islands. In Mesopotamia, Indian soldiers formed a majority of Allied manpower throughout the war. Neither Britain’s occupation of Mesopotamia nor its successful campaign in Palestine would have occurred without Indian assistance. Sikh soldiers even helped the Japanese to evict Germans from their Chinese colony of Qingdao.Scholars have started to pay more attention to the nearly 140,000 Chinese and Vietnamese contract labourers hired by the British and French governments to maintain the war’s infrastructure, mostly digging trenches. We know more about how interwar Europe became host to a multitude of anticolonial movements; the east Asian expatriate community in Paris at one point included Zhou Enlai, later the premier of China, as well as Ho Chi Minh. Cruel mistreatment, in the form of segregation and slave labour, was the fate of many of these Asians and Africans in Europe. Deng Xiaoping, who arrived in France just after the war, later recalled “the humiliations” inflicted upon fellow Chinese by “the running dogs of capitalists”.

But in order to grasp the current homecoming of white supremacism in the west, we need an even deeper history – one that shows how whiteness became in the late 19th century the assurance of individual identity and dignity, as well as the basis of military and diplomatic alliances.