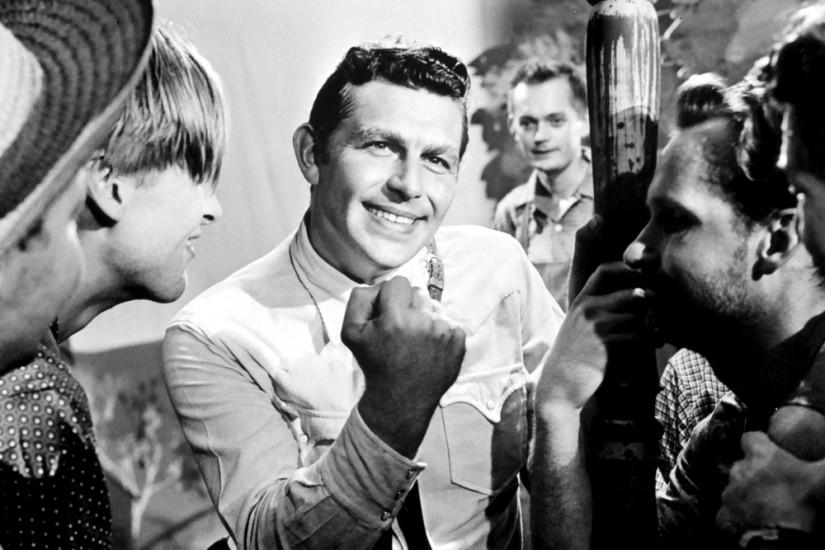 Andy Griffith as Larry "Lonesome" Rhodes in 'A Face in the Crowd' (1957).
AF Archive/Alamy

In any debate about the vintage movie that most accurately predicted Donald J. Trump’s presidency, director Elia Kazan and screenwriter Budd Schulberg’s 1957A Face in the Crowd is the hands-down winner among the cognoscenti. And not without reason, since it’s the tale of a crude and increasingly megalomaniacal TV star turned rambunctious, sinister demagogue. The big difference between fiction and reality is that Andy Griffith’s Lonesome Rhodes gets brought down by his own hardscrabble fan base when he’s only beginning to set his sights on a future in Washington, D.C.

The movie’s morale-boosting finale—in which a pipe-smoking Walter Matthau confidently pronounces, “We get wise to him. That’s our strength. We get wise to him.”—was a cheat at the time, and rings awfully false today. But the movie’s premise obviously doesn’t, and the proof isn’t only in the pudding. It’s in the Oval Office, tweeting bilge and ranting about witch hunts in between hosting rallies more scarily virulent than any previous president has ever thrived on.

That’s what people pleased by their film-maven acumen would have the rest of us believe, anyhow. But what does it mean to feel gratified that Trump’s presidency vindicates a sixty-one-year-old movie whose reputation goes on vacation whenever a Democrat is in the White House? A Face in the Crowd’s primary appeal is to the liberal audience’s sense of superiority—panicked superiority—to the rubes who can be gulled by a Lonesome Rhodes or a Donald Trump. Unlike the masses, we didn’t need to get wise to them; we always were.

Letting sophisticates pat themselves on the back for being smarter than the hoodwinked yokels out there isn’t the movie’s ostensible reason for being, of course. A Face in the Crowd solemnly sets out to dramatize the perils of an unscrupulous media star’s ability to manipulate his public to murkily nefarious political ends. It’s a stridently self-devised mission statement that gets chewed over in Schulberg’s dialogue to increasingly glutinous effect. Rhodes’s rise confirms the intellectual Matthau’s worst suspicions well before Patricia Neal, as our run-amok back-roads galoot’s discoverer and enabler, catches on that she’s created a monster.

Still, if we’re judging A Face in the Crowd as agitprop, its ostensible reason for being looks flimsy today. What sort of warning is rigged to make its target audience feel smug? Answer: too many of them, at least on film, with Stanley Kubrick’s Dr. Strangelove as the eternal Exhibit A. Yet an irony that’s easy to overlook is that admiring any cautionary tale’s uncanny anticipation of real-world events amounts to saying the work failed in its educational purpose. The genre’s whole point—the justification for the hyperbole—is to end up as the ultimate form of fake news, once the big public is alerted to the dangerous shape of things to come.