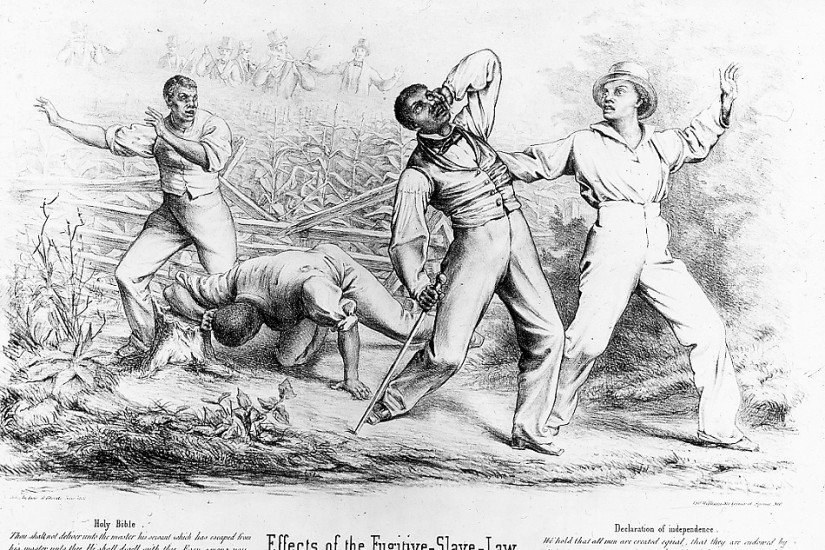 The Fugitive Slave Law turned the nation upside down. Southerners who had once insisted on states’ rights now demanded federal intervention to enforce what they considered their property rights. Northerners who had once derided the South for its theory of “nullification”—John C. Calhoun’s idea that acts of Congress require consent from each individual state before they can take effect within its borders—now became nullifiers themselves. The Fugitive Slave Law clarified just how incompatible North and South had become. It broke the national Democratic Party into Northern and Southern factions. It fractured the Whig Party into “Cotton Whigs” and “Conscience Whigs.” It made the possibility of disunion, once an extremist idea, seem suddenly plausible. One eminent New Englander replied to the Southern secessionist threat with a shrug of disgust: “If the union be in any way dependent on an act so revolting in every regard, then it ought not to exist.”

Most important, the Fugitive Slave Law of 1850 made clear that slavery was not a Southern phenomenon but a national phenomenon. Northerners who had once been able to pretend that slavery had nothing to do with them could no longer evade their complicity.

Considering this history may help put into perspective our contemporary anxiety that America is a hopelessly divided nation facing insoluble problems. In fact, none of the issues of our time—economic inequality, affordability of health care, future of the environment, regulation of immigration—recalcitrant as they may be to bipartisan compromise, compares even remotely to the impasse of the mid-19th century. “Humanity cries out against this vast enormity,” Herman Melville wrote a year before the Fugitive Slave Law was passed, “but not one man knows a prudent remedy.” By “prudent” he meant some way of destroying slavery without destroying the union itself.

Yet the story of the Fugitive Slave Law is also a distant mirror in which we may see a version of ourselves. It alienated many Americans from their country and compelled them to decide how to behave in the face of federal laws and actions that violated their personal convictions. Many white people in the North struggled to find a way, as one antislavery minister put it, “to obey the law while respecting themselves.”