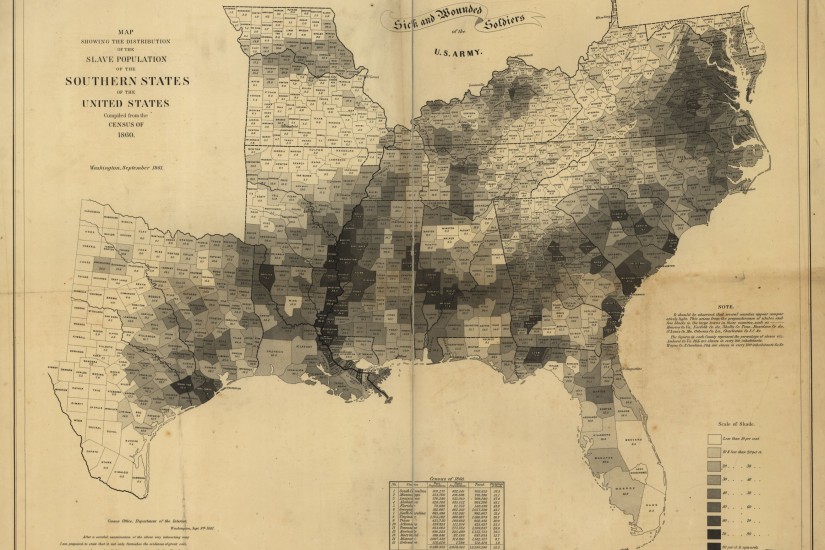 Map showing the distribution of the slave population of the southern states of the United States. Compiled from the census of 1860.
Henry S. Graham/Library of Congress
…

Though thematic mapping had its origins in the 19th century, the technique is useful for understanding history in our own day. One of the fundamental problems of history is scale: how can historians move between understanding the past in terms of a single life and in the lives of millions; within a city and at the bounds of continents; over a period of days and over the span of centuries? Maps can’t tell us everything, but they can help, especially interactive web maps that can zoom in and out, represent more than one subject, and be set in motion to show change over time.

To help show the big patterns of American slavery, I have created an interactive map of the spread of slavery. Where the Coast Survey map showed one measure, the interactive map shows the population of slaves, of free African Americans, of all free people, and of the entire United States, as well as each of those measure in terms of population density and the percentage of the total population. The map extends from the first Census in 1790 to the Census taken in 1860 on the eve of the Civil War. You can explore the map for yourself, but below I have created animations to highlight some of the major patterns.

When looking at all of these maps together, it's noticable that even as the total number of enslaved peoples in the United States increased between 1790 and 1860, the multitudes were dispersed across the increasing expanse of the United States, rather than becoming more concentrated in areas where slavery was well established.