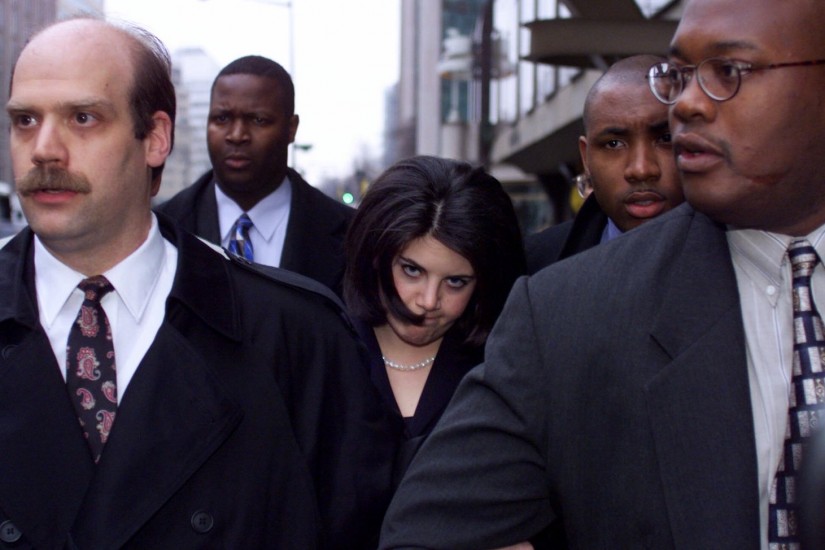 Monica Lewinsky and her entourage walk back to her Washington hotel after visiting her attorneys' office, February 2, 1999.
Greg Gibson/Associated Press
…

Even as I began my own self-reckoning, in 2018, another shift occurred. After occupying distant orbits for two decades, we finally reached the perigee. For the first time in more than 15 years, Bill Clinton was being asked directly about what transpired. If you want to know what power looks like, watch a man safely, even smugly, do interviews for decades, without ever worrying whether he will be asked the questions he doesn’t want to answer. But in June of this year, during an interview on NBC, Craig Melvin asked Bill Clinton those questions. Was I owed a direct apology from him? Bill’s indignant answer: “No.”

He contended that he had apologized publicly in 1998. I did as well. My first public words after the scandal—uttered in an interview with Barbara Walters on March 3, 1999—were an apology directly to Chelsea and Mrs. Clinton. And if I were to see Hillary Clinton in person today, I know that I would summon up whatever force I needed to again acknowledge to her—sincerely—how very sorry I am. I know I would do this, because I have done it in other difficult situations related to 1998. I have also written letters apologizing to others—including some who also wronged me gravely. I believe that when we are trapped by our inability to evolve, by our inability to empathize humbly and painfully with others, then we remain victims ourselves.

So, what feels more important to me than whether I am owed or deserving of a personal apology is my belief that Bill Clinton should want to apologize. I’m less disappointed by him, and more disappointed for him. He would be a better man for it . . . and we, in turn, a better society.

In 2004, while promoting his autobiography, My Life, Bill Clinton gave an extensive interview to Dan Rather. Rather asked Clinton why he had conducted an inappropriate relationship with me. (Discussions of this topic seldom acknowledge that I was not the first person with whom he stepped outside his marriage.)

Why did I choose to participate in this docuseries? One main reason: because I could. Throughout history, women have been traduced and silenced. Now, it’s our time to tell our own stories in our own words.

…
View on The Hive
View Connections