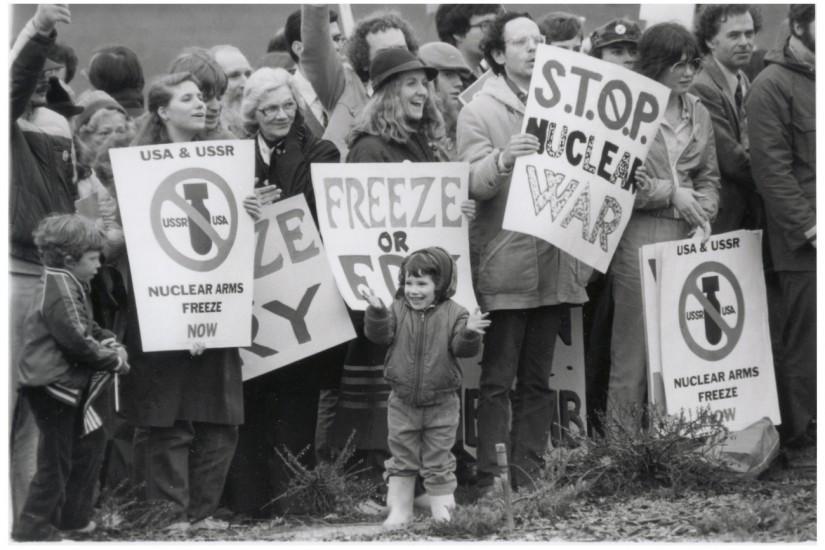 A nuclear freeze movement march from the U.S. Capitol to the White House in a demonstration against intervention in Nicaragua and for a freeze on nuclear weapons on April 20, 1985.
flickr.com/washington_area_spark
…

Beginning in 1979, as the Soviet Union deployed SS-20 missiles in Eastern Europe and NATO prepared to deploy new cruise and Pershing missiles in the West, millions of people took to the streets to demand an end to an accelerating arms race that put Europe in the nuclear crosshairs. In 1981 and again in 1983, massive protest marches occurred all across Western Europe—the largest rallies in postwar European history. In the United States, the nuclear-freeze movement spread like a populist prairie fire. Hundreds of cities and towns and nine states conducted public referendums calling for a halt to US and Soviet nuclear-weapons development. In June 1982 close to a million people converged on New York’s Central Park for the Rally to Freeze and Reverse the Arms Race, the largest peace rally in American history.

The many citizen actions that took place on both sides of the Atlantic during those years put pressure on political leaders to respond. With European officials calling for negotiations, the Reagan administration agreed to open talks with the Soviet Union in the fall of 1981, much sooner than hard-liners had planned. Defense Secretary Caspar Weinberger told a meeting of Catholic bishops that the administration would not negotiate seriously with the Soviet Union until after the United States had “rearmed,” a process he estimated would take eight years. Yet, within months of taking office, the United States was at the bargaining table, driven in part by the political demands of the disarmament movement. Weinberger acknowledged in his memoir that antinuclear demonstrations generated pressure on NATO ministers to begin negotiations.

Public protests also shaped the content of the negotiations. At the opening session of the talks, the United States and its NATO allies proposed the so-called zero option: the elimination of all intermediate-range weapons, on both sides. No SS-20s or cruise and Pershing missiles. The idea of the zero solution originated in the demands of the antinuclear movement. A State Department official told scholar-activist Mary Kaldor, “We got the idea from your banners. You know, the ones that say ‘No Cruise, No Pershing, No SS-20s.’” A senior White House counselor said the zero solution was “our response to the antinuclear people.” Weinberger also attributed the proposal to “a number of antinuclear groups” and political leaders in Europe.