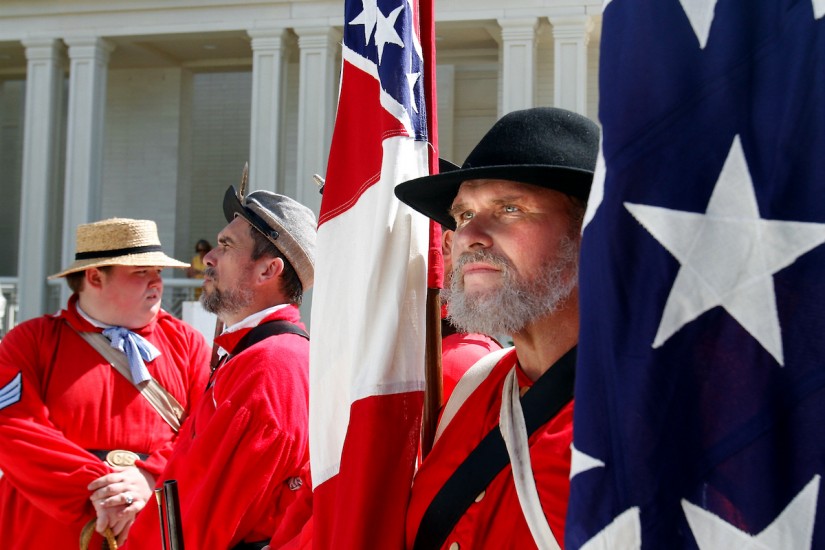 Members of the Mississippi Division of the Sons of Confederate Veterans at the official ribbon cutting for the Jefferson Davis Presidential Library at Beauvoir in Biloxi (2013) .
AP Photo/The Sun Herald, Amanda McCoy
…

We went to Beauvoir, the nation’s grandest Confederate shrine, and to similar sites across the Old South, in the midst of the great debate raging in America over public monuments to the Confederate past. That controversy has erupted angrily, sometimes violently, in Virginia, North Carolina, Louisiana and Texas. The acrimony is unlikely to end soon. While authorities in a number of cities—Baltimore, Memphis, New Orleans, among others—have responded by removing Confederate monuments, roughly 700 remain across the South.

To address this explosive issue in a new way, we spent months investigating the history and financing of Confederate monuments and sites. Our findings directly contradict the most common justifications for continuing to preserve and sustain these memorials.

First, far from simply being markers of historic events and people, as proponents argue, these memorials were created and funded by Jim Crow governments to pay homage to a slave-owning society and to serve as blunt assertions of dominance over African-Americans.

Second, contrary to the claim that today’s objections to the monuments are merely the product of contemporary political correctness, they were actively opposed at the time, often by African-Americans, as instruments of white power.

For our investigation, the most extensive effort to capture the scope of public spending on Confederate memorials and organizations, we submitted 175 open records requests to the states of the former Confederacy, plus Missouri and Kentucky, and to federal, county and municipal authorities. We also combed through scores of nonprofit tax filings and public reports. Though we undoubtedly missed some expenditures, we have identified significant public funding for Confederate sites and groups in Mississippi, Virginia, Alabama, Georgia, Florida, Kentucky, South Carolina and Tennessee.

In addition, we visited dozens of sites, to document how they represent history and, in particular, slavery: After all, the Confederacy’s founding documents make clear that the Confederacy was established to defend and perpetuate that crime against humanity.

A century and a half after the Civil War, American taxpayers are still helping to sustain the defeated Rebels’ racist doctrine, the Lost Cause.