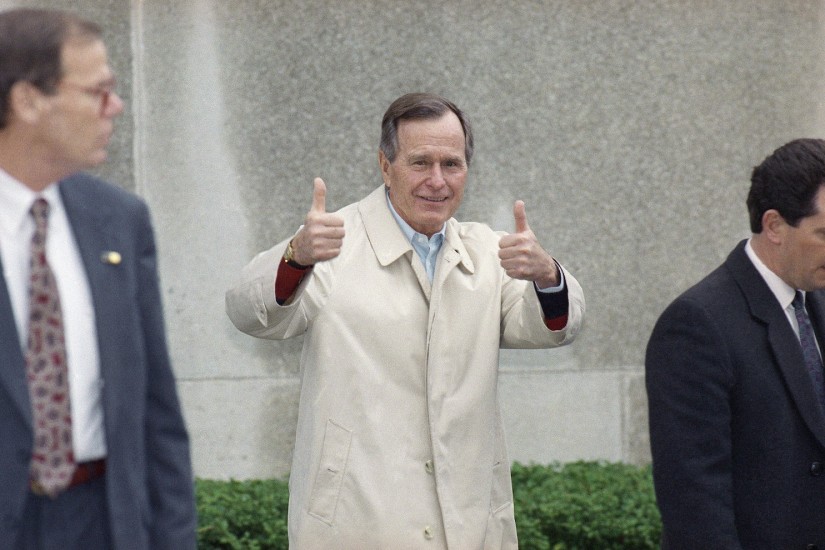 George H. Bush, in the final days of his presidency, gives a thumbs-up outside Bethesda Naval Hospital after his annual physical examination, January 12, 1993.
Doug Mills/Associated Press

George Bush, Sr., has died, and our national media have begun the familiar rituals of presidential passings: round-the-clock pieties on cable news, fond tributes from associates, the inevitable softening of the rough edges. This isn’t surprising. There’s ancient wisdom in the Latin aphorism de mortuis nil nisi bonum (speak nothing but good of the dead). The urge to prettify a politician’s legacy upon his demise is understandable and in some ways reflects our finer selves. Bush’s family, friends and admirers deserve comfort in their grief.

But when it comes to presidents and historical actors of consequence, we also need critical dissent. When writing my first book, Nixon’s Shadow, about that president’s endlessly protean image, I found myself grateful that at the time of his funeral—a whitewash that minimized his constitutional crimes—sober, serious historians like David Halberstam and Garry Wills stood up to provide corrective reminders. Had they not done so, future readers might have believed that Nixon’s attempted comeback had succeeded when in fact it did not. Respect for the dead must coexist with respect for the historical record.

In the case of George Bush, this balancing act means acknowledging not only his positive qualities and achievements—as so many news outlets have already copiously done—but also what may have been his defining political hallmark: his cynicism. From his opportunistic criticism of the 1964 Civil Right Act, to his 1980 election season embrace of supply-side economics and anti-abortion politics, to his last act as president—pardoning many of the Iran Contra crew in order to protect himself—there was a recurring tendency to place short-term gain above longstanding values.

This isn’t to say Bush lacked principles. As a young man he volunteered to fight in World War II; as an old man, he undertook important post-presidential disaster-relief efforts. These and other acts showed courage and class. At times—in working with Democrats on clean-air legislation, the Americans with Disabilities Act, and the 1990 deal to tame the debilitating Reagan-era budget deficits—he acted humanely and even nobly. But in this historian’s reckoning, self-interest prevailed too often over principle. My friend the historian Tim Naftali has called Bush the most underrated president of our times. I would say that what we’re now seeing proves the opposite: Bush was the most overrated president since Dwight Eisenhower, and possibly of all time.