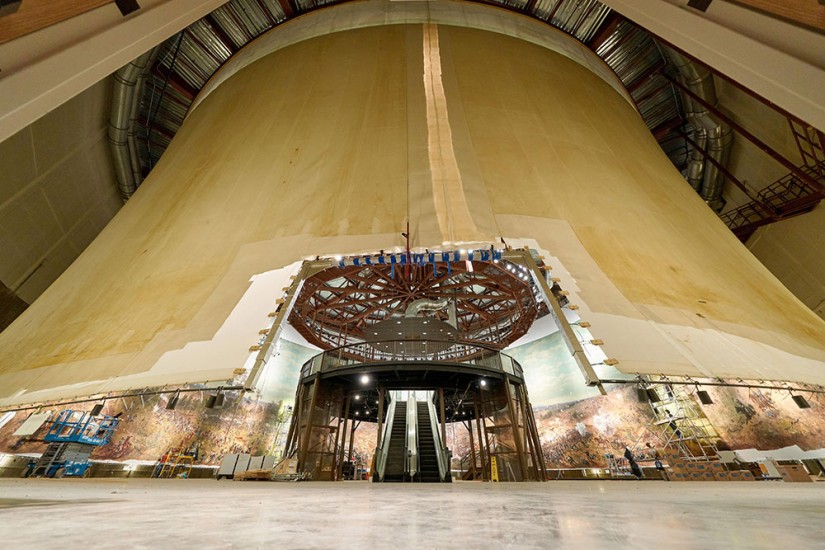 When I was a little boy growing up in South Carolina, my mom decided to take me and a neighborhood girl on a big history trip and visit the sights in Atlanta. Emphasis on the big. We saw Stone Mountain, the half-finished Confederate rival of Mount Rushmore. And at some point I recall clicking through the turnstile of a massive building at the Atlanta Zoo to see something amazing, “the largest painting in the world.

I wish I could remember anything other than that everything felt dank in there, like a long unvisited cellar, but the thing was, as promised, insanely big. It was called the Cyclorama, and the canvas was suspended around the 360 degrees of a high circular wall, showing hundreds of clashing soldiers. If I had listened to the guide, I might have heard that here was a great Confederate victory in the Civil War, depicted in images almost three stories high and more than a football field long. And I would have learned of its mysterious origin—how in the 1890s, a circus came to town with this spectacular visual entertainment and some exotic animals. But the circus went bankrupt, and everything that I was looking at—this big canvas and all the animals—had washed up here, in Atlanta’s Grant Park.

All of that is an exaggeration, of course. It’s not the largest painting in the world, although it’s up there; and while it’s huge, those dimensions are mostly hyped. The painting depicts the Battle of Atlanta, a decisive Union victory in 1864. And the story of the Cyclorama’s journey is no carnival tale but more a Homeric odyssey for a canvas that got touched up and repainted as it got kicked farther and farther south until it was marooned in the Atlanta Zoo.

To gaze upon the painting today—restored, reinstalled and reopening in February at the Atlanta History Center—is to see an unintended monument to the wonderments of accretion: accretions not merely of paint, but of mythmaking, distortion, error, misinterpretation, politics, opportunism, crowd-pleasing, revisionism, marketing, propaganda and cover-up (literally). Only a few years ago, the attraction seemed done for. Attendance was down to stragglers, and the city was hemorrhaging money. The future of the big canvas seemed to be a storage bin somewhere and, after some time, the dustbin.

But then a few folks in Atlanta realized that restoring the painting would not only resurrect one of the more curious visual illusions of the 1880s, but also show, in the paint in front of your eyes, a neat timeline of the many shifts in Southern history since Appomattox. This was no mere cyclorama. What the saviors had on their hands was, ladies and gentlemen, the largest palimpsest of Civil War memory to be found anywhere on planet Earth—the Atlanta Cyclorama, one of the great wonders of the postmodern world.