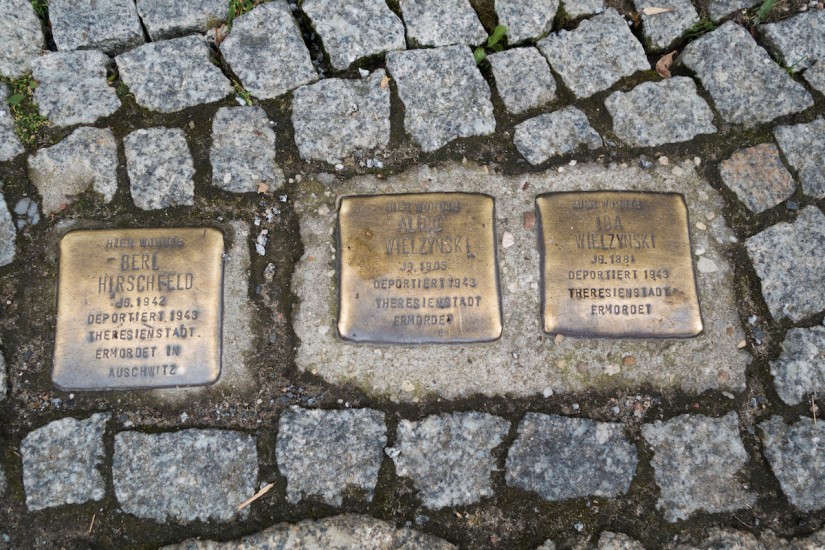 Across Germany and now in other parts of Europe, there has been an "art project" to commemorate the victims of the Nazis by placing small brass plaques among the cobblestones in front of their former addresses.
flickr.com/quinet
…

Beginning in 1992, German artist Gunter Demnig began to engrave brass cobblestones with the names, dates, and places of birth and death of Holocaust victims. He then installed the stones—called Stolpersteine, or “stumbling stones”— in front of the person’s last chosen address, often at the request and expense of the current inhabitants of the building.

While the project was initiated in Germany, it has since spread all over Europe, with over 70,000 stones placed so far. This number does not even begin to approach the total number of Holocaust victims (estimates range anywhere between six and seventeen million), but in walking through the streets of the cities in which they appear—Berlin in particular—one is struck by their presence. Subtle at first, the little stones are not without their own power, drawing in visitors and residents alike. Having consumed the information they contain, one’s gaze tends to drift upward toward the building itself. In which apartment did this person reside? What kind of life did they lead?

In effect, the project of the Stolpersteine is “decentralized,” in that the stones contribute to the urban infrastructure quite differently than “centralized” memorials.  And yet aspects of their existence are systematized. They carry a uniform appearance, are installed by the same artist, and are tracked with a useful website that allows you to search by name or by location.

The Stolpersteine are not without controversy. Some critics argue that their subjection to everyday use tarnishes the memory of those it seeks to memorialize. Indeed, they weather the elements, they are walked on and over, they accrue various unwanted substances, and they are subject to vandalism and theft. But of course this is precisely the point. They connect the power, weight, and responsibility of remembering a difficult past with everyday lived experience.

It is not my intention to conflate victims of the Holocaust with those of North American slavery, Jim-Crow, and later civil rights struggles. But I think it is worth thinking through how memory of the confederacy, slavery, and the general flavor of US history would differ if such a bottom-up strategy of memory were adopted. How would we remember differently if the focus of our memorials were placed on the victims of power than the abusers of that power? For example, what if the locations of lynchings, slave dwellings, and other race-induced violence and oppression were marked in some way?