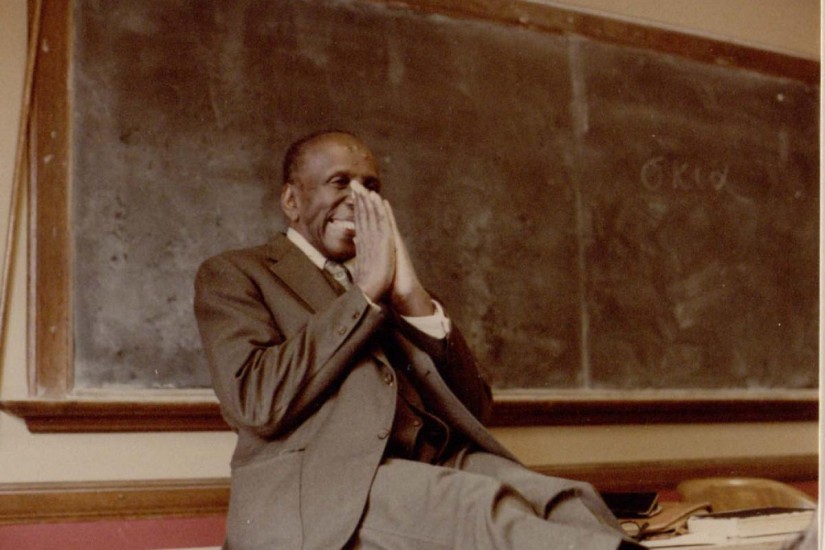 Although he did not march on the front lines, Howard Thurman is one of those often-overlooked heroes. He played a key role in providing the theological foundation for the civil rights movement and helped pave the spiritual path upon which King and others would trod. As Thurman argued, “It was important that individuals who were in the thick of the struggle for social change would be able to find renewal and fresh courage in the spiritual resources of the church.” His efforts demonstrate that effective social action requires a community working together for change that is bonded together by a coherent ethical, theological or philosophical foundation.

Although Thurman was a nationally and internationally recognized figure during his lifetime, today, if remembered at all, he is known as a mentor to Dr. King, including his likely influence on King’s merging the religion of Jesus with Gandhi’s nonviolent resistance.

As the leader of a small group of African Americans on a speaking tour in India, Ceylon (Sri Lanka) and Burma (Myanmar) in 1935-1936, Thurman was the first African American to meet with Mahatma Gandhi and incorporate Gandhi’s insights — such as satyagraha or “soul force” — into his theology. Thurman and Gandhi shared a deep reverence for the teachings of Jesus and the belief that modern Christianity had deserted his true message.

After his meeting with Gandhi, Thurman undertook “an exploration of the problems that arise in the experience of people who attempt to be Christian in a society that is essentially un-Christian.” This led him in 1949 to publish his best-known book, “Jesus and the Disinherited,” which served as an inspiration for many civil rights leaders (Martin Luther King often carried this classic work).

In that book, Thurman argued that the religion of Jesus was born in the context of a people suffering persecution and oppression. Over the centuries, however, Christianity became the established religion of nations whose use of power and violence violated the essence of his message. Thurman realized that Jesus, a poor first-century Jew, spoke to others who, like him, were poor, oppressed, disinherited and dispossessed — those with their “backs constantly against the wall.” By highlighting Jesus’s message to the oppressed, Thurman made the teachings of Jesus again relevant for the struggle for civil and human rights.