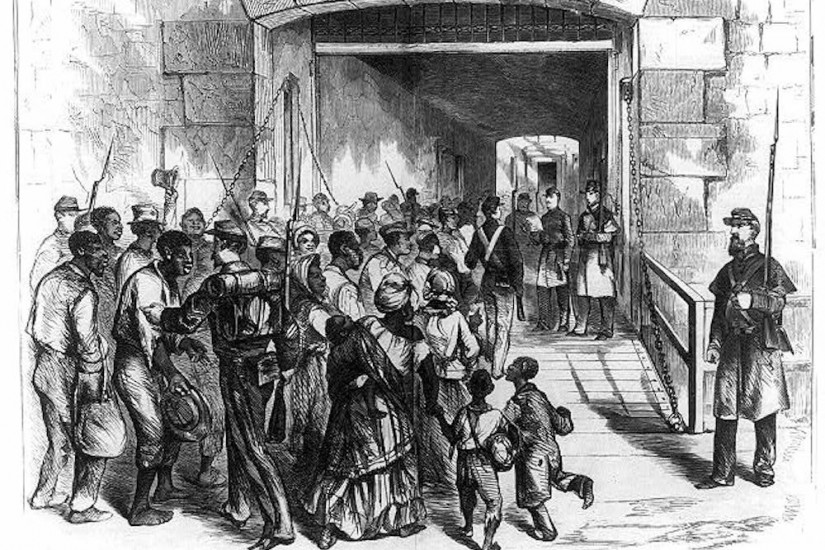 What happened in the fall of 2018 should be familiar to any historian of immigration in American history—the positioning of nativist attacks on migrants and refugees as a wedge issue in electoral politics—and examples of it stretch back into the nineteenth century (think: Know Nothing Party). But less familiar to historians of the Civil War era, perhaps, was a similar moment in the 1860s, when an attempted migration was also turned back right before a contested midterm election. This time, though, it involved tens of thousands of formerly enslaved men, women, and children from the American South looking northward to freedom.

It happened in the fall of 1862. Abraham Lincoln had just issued the Emancipation Proclamation publicly in late September, which decisively aligned the Union, and the Republican Party, with emancipation. By that time, many thousands of formerly enslaved men, women, and children, were congregating in refugee camps inside Union lines in the South, largely along the coast of Virginia and the Carolinas but increasingly in the Mississippi Valley and farther west into Kansas too. In the eyes of military commanders in these regions, Lincoln’s proclamation seemed to acknowledge the reality of what was happening around them but offered little of the concrete assistance they needed. A humanitarian crisis was escalating in their midst, which, depending on the officials’ sympathies, either distressed or annoyed them. All were searching for an answer to the same (and often-asked) question: What should we do with the people?

At Fort Monroe, Virginia, the commanding general, John A. Dix, thought he found an answer in the northern states. An anti-abolitionist Democrat with little sympathy for these refugees from slavery, Dix was most concerned with ridding his command of what he termed “a very great source of embarrassment” and returning his focus to what he believed were strictly military needs. Sending black refugees to the North would get them out of his way. So with the consent of Secretary of War Edwin Stanton, Dix identified nine northern governors whom he thought would be receptive and wrote first to the one he deemed most sympathetic—Governor John Andrew of Massachusetts. Andrew was not only an antislavery Republican but also the president of the Educational Commission for Freedmen. It seemed logical that he would open his state’s borders to the South’s refugees from slavery.