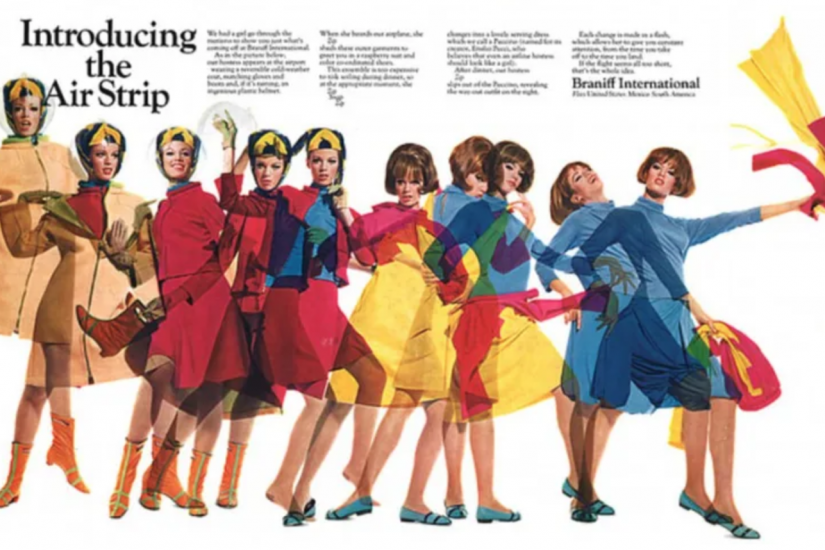 In 1971, National Airlines introduced a new slogan: “Fly Me.”

The innuendo-laden campaign cost National a small fortune—they spent over $9 million a year on the ads—but it paid off. The National Organization for Women objected to the ads, calling them sexist, saying that they presented flight attendants as a “flying meat market” and invited passengers to make sexual advances. Nevertheless, the “Fly Me” series raised the carrier’s profile and won a handful of advertising awards.

Advertising the bodies of women employees was good for business. Though the “Fly Me” campaign is now displayed on a number of websites, often as a glaring example of outdated sexism, at the time, “Fly Me” reflected the widespread sexualization of flight attendants, which belied the harsh working conditions that these women negotiated while flying unfriendly skies. That began to change in the mid-1960s when flight attendants mounted an organized push against their employers—and ultimately, improved their workplaces.

The bodies of women flight attendants have long been an integral part of the airlines’ marketing strategy. In the postwar period, government regulations ensured that fares, routes, and planes were nearly indistinguishable. To stand out, airlines marketed their flight attendants’ looks and promised an exciting or erotic in-flight experience. At the dawn of the commercial aviation industry, airlines introduced formal and informal policies to ensure that their flight attendants were uniformly young, slender, unmarried white women, running job ads with explicit requirements for height, weight, and marital status. “Charm farms,” as stewardess schools were often called, taught women how to exercise, walk in high heels, and fashionably style their hair and makeup. They often trained fashion models, as well.

“When we got back from our all-day beauty overhaul, we all burst into tears. We couldn’t believe our eyes: we all looked alike—we were clones of each other!” recalled Betty Turner Hines, a former flight attendant for Pennsylvania Central.