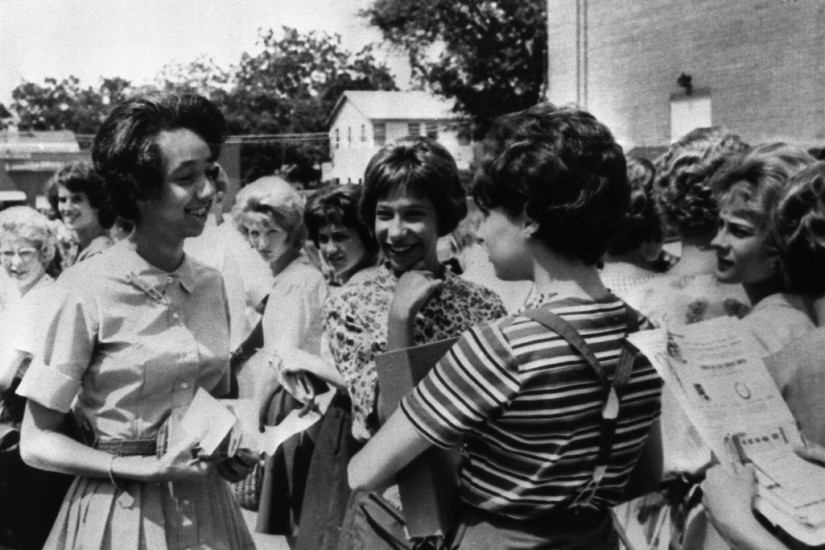 Millicent Brown, left, 15, one of two black girls to enter Rivers High School in Charleston, S.C, chats with fellow students while awaiting a report from police and fireman concerning a bomb scare at the school on Sept. 3, 1963.
Associated Press
…

Melinda D. Anderson: A disproportionate number of black girls were at the forefront of the school-desegregation movement from the late ’40s to the mid-’60s. Why were black girls continually chosen to break the color barrier?

Rachel Devlin: Interestingly, there are no written records about why girls were chosen over and over again in individual lawsuits. These choices were made on a level that was not always entirely conscious. Parents would explain why they should file a lawsuit, and girls agreed. Many of them said, “I was willing.” Other parents drafted their daughters, and the young women cooperated, yet most of the young women who participated were fully invested in school desegregation.

The other thing about girls is that they were good at it. To speak to principals and lawyers and the press you have to be poised, you have to be personable and diplomatic, and young black women had these attributes. They dealt with constant verbal and sexual harassment on the streets of southern cities, of northern cities, and they were acutely aware of their self-presentation in public. It was drilled into them as a way to protect their dignity. Also, very few African American girls and young women did not at some point in their lives work in a white home, and they had to learn how to navigate around white people.

But I want to be clear. This was not just about being accommodating—they knew how to stand their ground. Girls were good at combining different forms of bravery; they could be both stubborn and tough, but also project social openness. They had that sense of self-possession that was extremely useful in these situations.

Anderson: You write that the language in the Brown v. Board of Education decision contains “the same moral conviction that inspired black girls to walk up to the doors of white schools and seek to cross the threshold.” In what way are these girls’ untold stories reflected in this landmark ruling?

Devlin: A black girl walking up the steps of a white school and announcing her intentions to go to school with white children was a radical act of social optimism.  Most white people—and a good many African Americans—in the late 1940s and early 1950s believed that white and black children would never be able to learn in an integrated setting. That racial hostility was intractable.
In fact, judges who ruled against these plaintiffs said just that in their decisions.