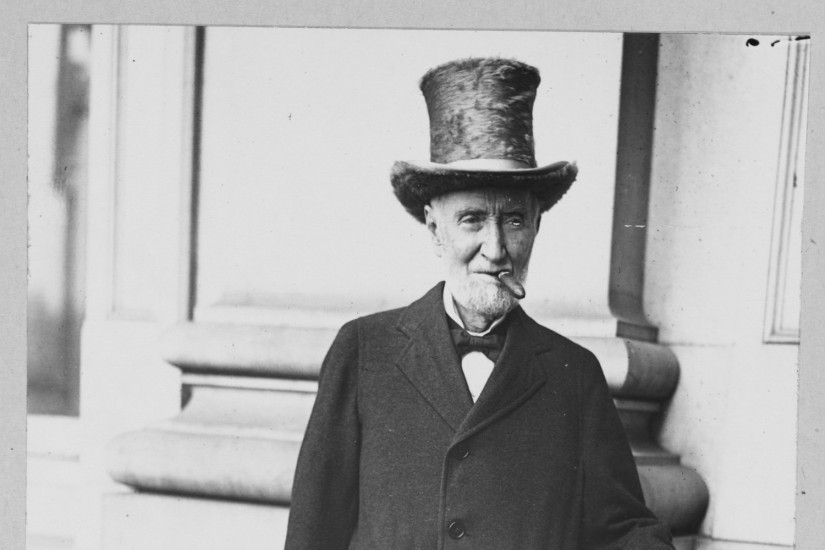 Joseph Gurney Cannon, who retired from Congress in 1923 after nearly 50 years in public service, dons his old beaver hat.
Library of Congress

Omar, a Minnesota Democrat and a Muslim who wears a headscarf for religious reasons, supports a Democratic plan to ease an 181-year-old ban on wearing hats in the House of Representatives. The hat-wearing Kremer vigorously opposed the ban before the House passed it in 1837.

Back then, all House members were men, and many wore hats while doing the people’s business. The House’s rowdy lack of decorum shocked some foreign visitors. Upon entering the U.S. House, “one is struck by the vulgar demeanor of that great assembly,” wrote French diplomat Alexis de Tocqueville. According to House historians, members “spat copious amounts of chewing tobacco, smoked cigars, carried weapons, swilled liquor procured from no fewer than 12 vendors in the Capitol, and unfurled newspapers at their desks which they used to prop up their feet during debate.”

It was in this atmosphere that, in 1822, Rep. Charles F. Mercer of Virginia proposed: “Nor shall any Member remain in the Hall covered during the session of the House.” (The “Old Hall” of the House was where members met from 1819 to 1857 after the British burned down the first hall in 1814). Mercer’s proposal won 63 votes but didn’t pass.

In 1828, Rep. George McDuffie of South Carolina, chairman of the House Ways and Means Committee, revived the issue. McDuffie argued that the sea of big hats worn by members muffled sound, making it harder to hear the debates. Pennsylvania’s Kremer, who wore a leopard-skin coat, retorted that the problem “was more in the Hall than in the hat.” He refused to remove his tall hat. Later, Kremer was memorialized in a hand-colored engraving showing him in a chair with a top hat on his head and reading a journal with the headline “Reform.”

In 1833, Rep. James K. Polk of Tennessee made another try for the sake of decorum. North Carolina Rep. Lewis Williams raised a practical objection: “If gentlemen were to be forbidden to wear their hats, what were they to do with them? No place was provided in which they could conveniently be put.” The House at the time didn’t have a cloakroom.

Rep. John M. Patton of Virginia argued that “the really harmless but apparently indecorous practice of wearing our hats” was a symbol of the House’s independence.