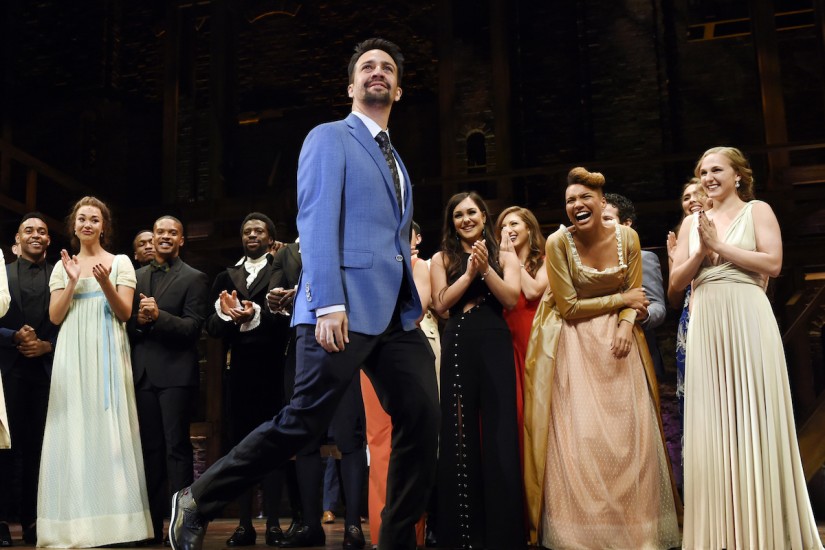 Lin-Manuel Miranda, creator of "Hamilton: An American Musical," walks onstage during the curtain call on the opening night of the Los Angeles run of the show on August 16, 2017.
Chris Pizzello/Invision/AP
…

This past weekend, Reed held a public reading, at the Nuyorican Poets Cafe, of a two-act play he’s written titled “The Haunting of Lin-Manuel Miranda.” (He is still raising money for a proper production.) It is, essentially, Reed’s first CounterPunch piece come to life, with a structure nicked from Dickens’s “A Christmas Carol.” In the play, a fictionalized and comically exasperated Miranda is harangued by a procession of ghosts: slaves owned by Hamilton’s in-laws, Native Americans absent from the story that the musical tells, an indentured white servant, Harriet Tubman. Perhaps they are embodiments of Miranda’s conscience—or perhaps, the play suggests, they are by-products of the Ambien that his agent has given him, to help him chill out as they plot their next blockbuster. Throughout these hauntings, Miranda is presented as entirely ill-equipped to deal with any fact-checking, always deferring to his musical’s main source, Ron Chernow’s biography “Alexander Hamilton,” published in 2004. Miranda’s gullibility is a repeated gag, and it went over reliably well with the Poets Cafe crowd. “Hello?!” he earnestly replies to one of the ghosts, in an exchange about Chernow. “He’s a prize-winning historian!” Another time, he simply yells, “But Ron Chernow!” (Reed, who read the part of Miranda’s agent, giggled when one of the ghosts eviscerated Miranda for his “corny” rhymes.)

Nothing really happens during “The Haunting of Lin-Manuel Miranda” beyond this slow chipping away at Miranda’s soft ignorance. During the post-reading talkback, Reed was careful to point out that the play’s central character wasn’t a “villain”—that his sin was merely shoddy research. He does come off as an impressionable dupe, though: “The Haunting of Lin-Manuel Miranda” is, in its current form, as harsh and heavy-handed as the title suggests. Thankfully, none of it was rapped. Some of the history lessons were long-winded and meandering—and maybe slightly confusing without a basic grasp of the original musical. (Reed himself has reportedly never actually seen “Hamilton.”) “The Haunting of Lin-Manuel Miranda” is a minor entry in an important and sometimes overwhelming body of work.

Squabbles and rivalries are often the result of professional jealousy, and previous generations of black and brown artists have warred in the margins over mainstream acclaim. But one of the most interesting aspects of Reed’s play was its evident lack of envy. It portrays the character of Miranda as a kind of victim. At one point, a ghost attempts to remind him that he, too, is a “worker,” a cog producing a six-hundred-per-cent return for his investors, who are the actual villains. Miranda begins to see the light when the ghost of Alexander Hamilton appears and proves to be a craven and openly racist man. He congratulates Miranda on his successful rehabilitation of Hamilton’s slave-owning past. Miranda is horrified. “This is all Ron Chernow’s fault!” he concludes, and he sets off to confront the historian, who, in Reed’s portrayal, is smug and unapologetic.