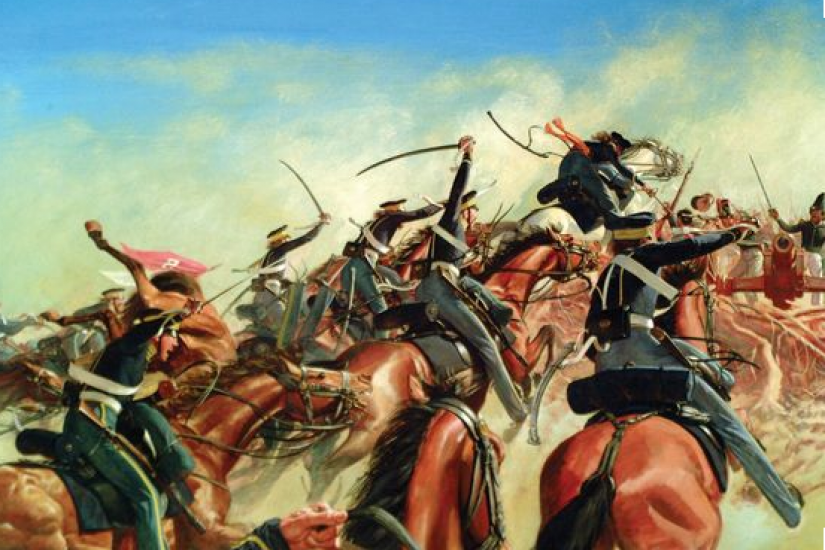 Romantic depiction of the First Regiment of Dragoons, the first unit of specifically “native-born” soldiers created by Congress to patrol the American West and borderlands.
US Army/Wikimedia
…

A different kind of western writer, the novelist Cormac McCarthy, had a name for the place where the frontier meets the border. He called it the blood meridian, where endless sky meets endless hate. His novel Blood Meridian (1985) tells of the marauding of a roving gang of borderland scalp-hunters around the time of the Mexican–American War (1846–48). The blood meridian signaled the place where the conceit of progress gave way to an infernal timelessness, to a land “filled with violent children orphaned by war,” where soldiers and settlers got caught in a dervish swirl, powered by demonic rages, moving in circles going nowhere. That place used to be out there, beyond the frontier. But the United States crossed it so many times that the line was erased.

Now, rather than the frontier opening up, the border is closing in. The nation’s archetype is no longer the pioneer. The icons now are the ICE raider and border agent. The log cabin has given way to detention centers where uniformed men and women—or private contractors—lock children in freezing rooms and force drugs on them so they will sleep, even as they deny them medicine. In The Line Becomes a River (2018), his memoir of his time working with the U.S. Border Patrol, Francisco Cantú tells of what he and his coworkers would do when they came across a stash of supplies hidden by migrants: “We slash their bottles and drain their water into the dry earth . . . we dump their backpacks and pile their food and clothes to be crushed and pissed on and stepped over, strewn across the desert and set ablaze.”

Such reports from the borderlands read like pages from Blood Meridian, from a world completely devoid of morality, stripped of the ability (or the need) to justify violence as necessary to bring about progress: “I still have nightmares,” writes Cantú, “visions of them staggering through the desert . . . men lost and wandering without food or water, dying slowly as they look for some road, some village, some way out. In my dreams I seek them out, searching in vain until finally I discover their bodies lying facedown on the ground before me, dead and stinking on the desert floor, human waypoints in a vast and smoldering expansion.”

The brutality piles up: children sexually and psychologically abused; migrants murdered, their murderers immune to prosecution; families teargassed. Where other frontier-theorist presidents, from Woodrow Wilson to Ronald Reagan, waxed lyrical about big skies and open ranges, the current occupant of the White House sings of a different symbol of the West. “Barbed wire,” Trump said, referring to one of the ways the soldiers he deployed to the border were going to keep out asylum seekers, “can be a beautiful sight.”