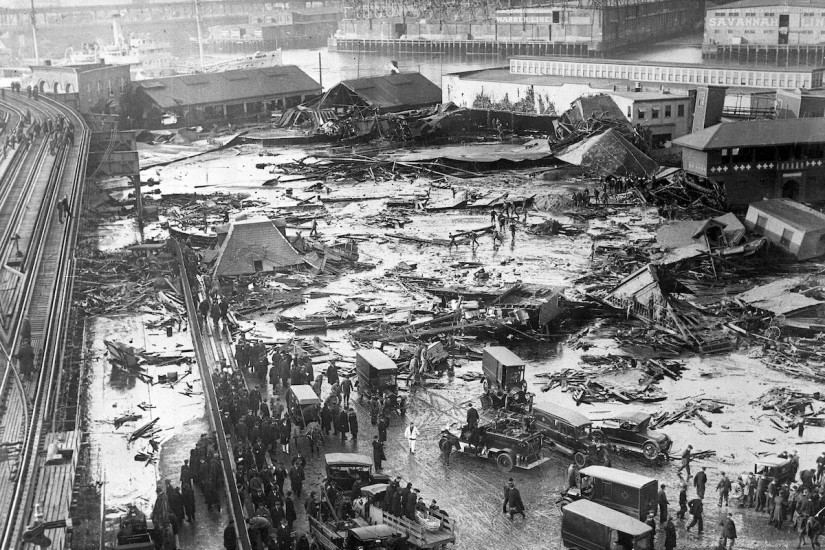 “The molasses flood got huge press coverage at the time, but then it faded from public memory,” says Liz Nelson Weaver, a member of Friends of the Boston Harborwalk, a volunteer group that’s won approval to install a more “engaging, interpretative” sign about the flood.

“It was an awful thing that happened,” Weaver says. “The fact that it tends to be turned into a ha-ha story does an incredible disservice to the people who lost their lives.”

And yet, we’re talking about molasses, the otherwise innocuous treacle used to give batters and gingerbread a brown cast and a quality chew. The gooey byproduct of refined sugarcane was much in demand during World War I because it could be converted to industrial alcohol, a critical ingredient in the manufacture of munitions. In 1915, the Purity Distilling Company had built a holding tank some 50-feet tall on Commercial Street, choosing the location for its proximity to Boston Harbor — molasses arrived from Puerto Rico and points south — and to the nearby railroad tracks that shuttled the sugary ooze to the manufacturing plant in Cambridge.

But in its haste to construct the tank — in a precinct populated, not coincidentally, by poor Italian immigrants powerless to prevent such a thing  from being shoehorned into their neighborhood — the company’s profit-hungry bosses dispensed with tests that would have revealed the structure’s lethal flaws.

The result was predictable. Indeed, signs of trouble appeared almost immediately in the form of dark, pearly streaks of molasses that ran down the sides of the monstrous tank. Street urchins greedily scraped up the gunk, using sticks to make primitive lollipops. But instead of inspecting the tank, the owners merely painted it brown to disguise the leaks. Residents and passersby also reported hearing a peculiar groaning sound coming from the mammoth cauldron long before it erupted.

Just after noon on January 15, 1919, with the sun high in the sky and temperatures topping 40 degrees, the tank failed spectacularly, coming apart like a wet paper bag and sending a wall of molasses roaring through the neighborhood. Moving at a rate of 50 feet per second, the rising tide leveled buildings and buckled the steel girders of the elevated railway, overwhelming everything and everyone in its wake, including 10-year-old Pasquale Iantosca, who was struck and killed by a train car swept from the tracks.

“Think of it,” says Puleo, the author of Dark Tide. “This giant wave hits. People drowned or were killed by debris. Others were horribly injured — fractured skulls and broken backs — and 25 horses were killed.”