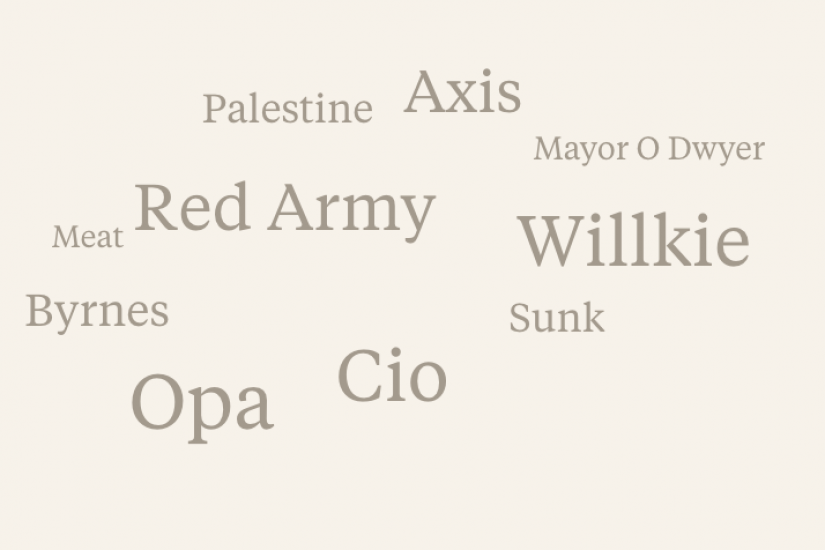 The words that most frequently appeared in New York Times headlines in the 1940s.
The Pudding

For years, we’ve tried to stay abreast of it all — the school shootings, the shifts in foreign policy, the playoff results, the firings, the appointments, and the rest of the news that streamed across our various screens.

Not this year. We’re in our early 30s, and 2018 marks the first time in our adult lives that we’ve taken a step back from the news cycle. It seems like there are countless fires burning, and each day brings more somber tidings. The flood of updates seems no longer manageable, in large part because the barrage of bad news seems to affect all levels of the international order. The stability of the recent half century has given way to a deep sense of uncertainty and confusion regarding the future.

For months, we’ve wanted some note-waving historian to emerge from the archives, and reassure us that, in fact, there’s no need to worry — we’re living through the same sense of unease that previous generations did during the Nixon administration, the Vietnam War, and the Iranian hostage crisis. But that’s yet, if at all likely, to happen. To gain a more balanced perspective, we decided to do some digging ourselves: below, you can take a tour through the past 100 years as reflected in the pages of one of America’s most-respected newspapers, The New York Times and compare the events of the past year to the tumult of the long 20th century.

For every decade, we’ve summarized the words that most frequently appear in NYT headlines, sizing each word relative to its disproportionate popularity. Selecting each one of these will allow you to see its popularity throughout the past century; you’ll also be able to explore the articles that the NYT published on each of these topics over the years by hovering over each decade in the chart.

…
View on The Pudding
View Connections