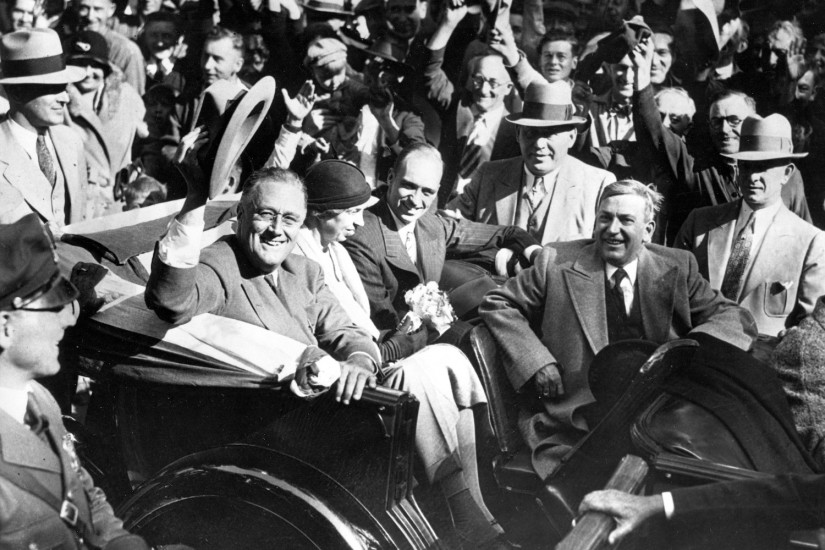 Then-governor Franklin D. Roosevelt of New York waves to the crowd at a stop in Milwaukee during his presidential campaign with his wife Eleanor seated beside him, October 1, 1932.
Associated Press

The New Deal is back.

Nearly a century after President Franklin D. Roosevelt began his effort to revive the American economy through government programs, Democrats are once again becoming fans of Roosevelt and his legacy. That should come as no surprise: The nation’s longest-serving leader, Roosevelt presided over the New Deal and waged the successful World War II fight against global fascism. His New Deal laid the groundwork for the economic boom that made the United States the envy of the world in the postwar decades, and it provided the impetus for the civil rights and Great Society reforms of the 1960s. Roosevelt helped forge a coalition that made the Democratic Party dominant for almost half a century and left a lasting legacy, including programs that remain strikingly popular today, such as Social Security.

Yet for the past half a century, leading Democrats have let Republicans dictate the terms of our politics, expressing surprising reluctance to celebrate Roosevelt or the New Deal.

Recently, however, both have returned to American politics with a vengeance. Newly elected Democratic Rep. Alexandria Ocasio-Cortez (N.Y.) and dozens of other representatives have proposed a “Green New Deal.” Calling for a return to the progressive system introduced during the New Deal and World War II years, Ocasio-Cortez is also promoting a 70 percent marginal tax rate for the highest earners, a proposal other members of her party and some liberal commentators have endorsed. The call for what Sen. Elizabeth Warren (Mass.) describes as a “Second New Deal” marks the reversal of decades of Democrats distancing themselves from Roosevelt and, if this new trend continues, promises to reinvigorate the party and its agenda.

The “New Deal order” lasted roughly from Roosevelt’s election in 1932 to Ronald Reagan’s ascendance in 1980. This era presents a paradox. On the one hand, many, including Donald Trump, look back on it as a golden age. Yet beginning in the 1970s, the forces that helped produce a broad middle class and relative income equality have been under assault — from both parties.

Conservatives had always been suspicious of the New Deal, with its corporate regulation, robust spending on public goods such as education and state support for an expanded labor movement. No surprises there. What changed is that as these programs came under critical scrutiny, many Democrats, rather than robustly defending Roosevelt’s legacy, piled on.