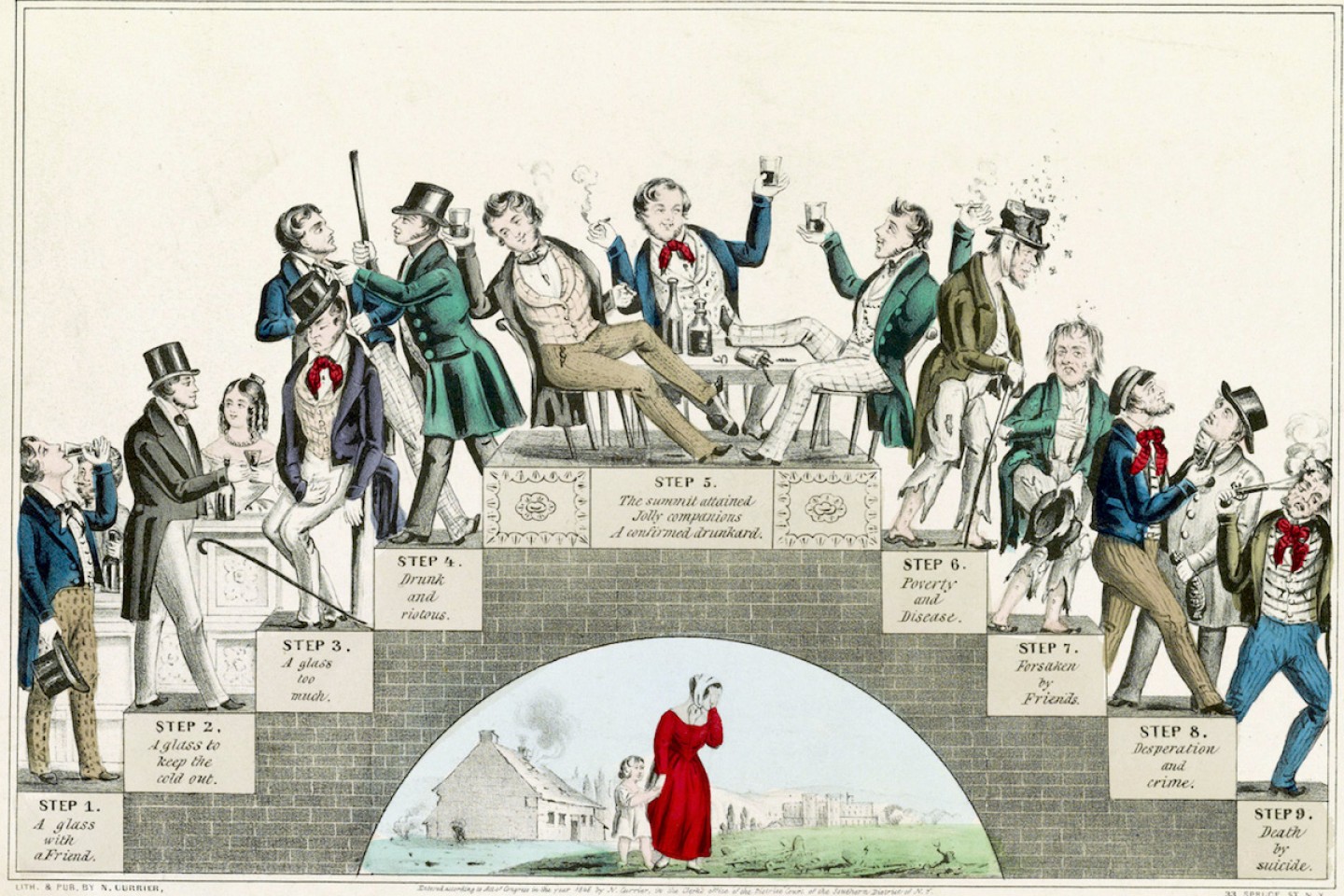 In 1826, an arresting series of engravings began appearing in shops, homes, and public spaces across the 24 states of the young republic. These images depicted the downfall of American men and their families due to alcohol abuse.

One popular example, labeled “the Direct Road to Poverty, Wretchedness, and Ruin,” told the story of a young family’s ruination in four scenes. The first was relatively benign: a young father treating himself to a seemingly harmless “morning dram.” This would not necessarily have been thought of as improper behavior in 19th century America. Bitters, now known as a cocktail ingredient, were commonly used as a kind of health tonic, and drinking a shot of them in the morning was not altogether unusual.

Nevertheless, that 8 a.m. glass of bitters was how the drunkard’s march toward the grave began. In the next panel, the same man (looking decidedly the worse for wear) contemplates a glass of rum being poured in a seedy barroom. He seems to have pawned off some of his family’s clothing in order to buy more spirits.

The second half of the series concludes the tale on a predictable and grim note. The man becomes a “confirmed drunkard,” unable to function or care for his children. The bleak final panel shows the family headed to an almshouse—their former home now awaiting auction, their front yard a pigsty.

On one level, this narrative might seem familiar. Addiction has been an ever-present trope in American culture for well over a century now. It’s built into the personal legends of some of the most celebrated American artists, and narratives of addiction and recovery are ubiquitous, appearing in literature, film, and journalism.

Yet when the “Drunkard’s Progress” images began to appear in the early 19th century, the concept of alcohol addiction was still a relatively new one. In many ways, the very idea of addiction was new, a byproduct of the availability of intoxicating substances to ordinary working people. These included not only alcoholic spirits, but also novelties like cocaine wine, morphine cough syrups, and cannabis tinctures.

The images of drunkenness and addiction that began to proliferate in 19th century mass media grew out of the nascent temperance movement, which was partially grounded in Christian moralizing. But the movement also had roots in what was then a new vision of medicine that emphasized the physical action of drugs on the body and mind. It was a radical break from the thinking of earlier generations, who saw intoxication as a product of the intervention of deities or spirits, or the flux of harmful “humors” in the body.

Concerns about alcohol abuse also took on a new urgency because of the sheer amount that was being consumed in the late 18th and early 19th centuries. Encouraged by wage growth and the wider availability of spirits like whiskey and gin, in 1830 the average American was putting back an estimated 7.1 gallons of pure alcohol per year. That’s more than three times the average today, and more than five times what it had been, according to historian John McCusker, in 1740s Britain.

The “epidemic” of alcoholism in 19th century America stemmed from the convergence of several factors. Economic changes resulting from industrialization led to a rapid urbanization of the country and the breakage of older ties to family, profession, and place. In an echo of the current opiate epidemic, many early proponents of the temperance movement highlighted alcoholism as a harbinger of a larger decline of the social order, and framed sobriety as part of a larger spiritual and personal transformation.

Another factor was the rise of modern medicine and psychiatry. Around the turn of the 19th century, social reformers and physicians like Benjamin Rush of Philadelphia began publishing clinical descriptions of longstanding behaviors. Rush’s 1784 essay on “the Effect of Ardent Spirits Upon Man” was one of the first efforts to pathologize alcohol dependence. Rush fused Enlightenment-era medical principles with Christian moralism to argue that overconsumption of distilled spirits led to madness and depravity. This psychological approach would eventually give rise to new terms like dipsomaniac (which first appeared in the 1840s) and alcoholic (a surprisingly recent word, dating back only to the 1880s).

(Rush became such a popular medical authority that he continued to haunt the field long after his death. Later in the century, a psychic medium named Sarah Danskin claimed to have been “the pupil” of the deceased Dr. Rush’s “spirit” for a period of 10 years.)

Interestingly, the lines that were drawn by the early reformers allowed for a little wiggle room. In his 1784 treatise, Rush included an image of a “moral thermometer,” portraying the difference between alcoholic and non-alcoholic drinks literally as one of degrees. Wine and strong beer were included in the section labeled “Temperance.” Contrast that with the absolutist approach to temperance taken by reformers a century later.

Although they don’t align neatly with later campaigns for legal prohibition, these stock images of the “drunkard’s progress” signaled the beginning of a longtime reliance on mass media on the part of anti-addiction reformers. Their efforts coincided with the rise not only of mass literacy, but also of new media formats and distribution venues, like signage and proto-billboards. The antebellum era ushered in telegraphs, color lithography and photography, as well as national newspapers and periodicals (some of which, like The New York Times, Harper’s, and the Atlantic, persist to this day). All of these changes helped spread the message of temperance crusaders, who often proved to be canny with the slogan and archetypal image.

It might be tempting to draw comparisons between the alcohol problem in 19th century America and the contemporary epidemic of opiate addition. But there are important differences between the two eras. Substance abuse today is still discussed in the language of medical pathology, but it is far less likely to be denounced as an indication of moral depravity. The earlier obsession with character has largely been superseded by narratives of recovery.

The Drunkard’s Progress as depicted in 19th century media inevitably led to the grave. Today, it is much more likely to lead to an AA meeting.

Read this story on Medium.