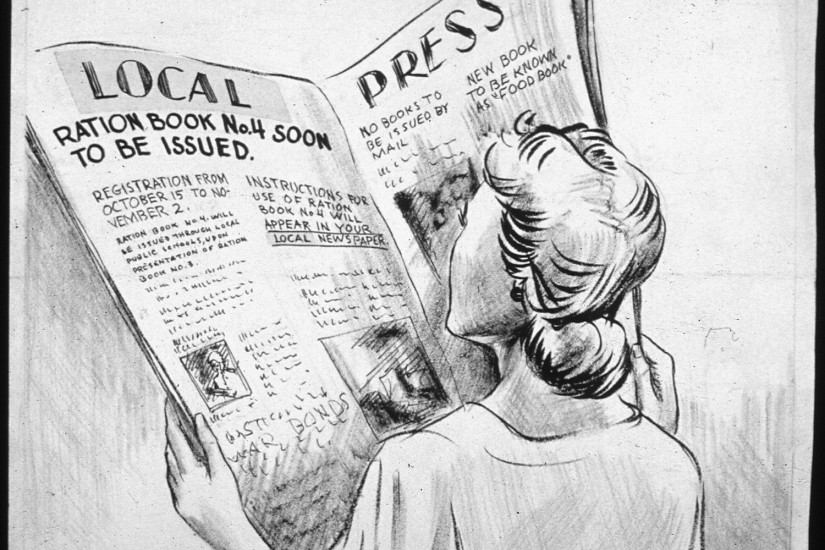 An illustration from the Office of War Information encouraging Americans to read their local newspapers to be informed of rationing (1943).
Wikimedia Commons
…

Jonah Peretti started out soaking up postmodern theory at U.C. Santa Cruz in the mid-nineteen-nineties, and later published a scholarly journal article about the scrambled, disjointed, and incoherent way of thinking produced by accelerated visual experiences under late capitalism. Or something like that. Imagine an article written by that American Studies professor in Don DeLillo’s “White Noise.” Peretti thought that watching a lot of MTV can mess with your head—“The rapid fire succession of signifiers in MTV style media erodes the viewer’s sense of temporal continuity”—leaving you confused, stupid, and lonely. “Capitalism needs schizophrenia, but it also needs egos,” Peretti wrote. “The contradiction is resolved through the acceleration of the temporal rhythm of late capitalist visual culture. This type of acceleration encourages weak egos that are easily formed, and fade away just as easily.” Voilà, a business plan!

Peretti’s career in viral content began in 2001, with a prank involving e-mail and Nike sneakers while he was a graduate student at the M.I.T. Media Lab. (Peretti ordered custom sneakers embroidered with the word “sweatshop” and then circulated Nike’s reply.) In 2005, a year the New York Times Company laid off five hundred employees and the Post began paying people to retire early, Peretti joined Andrew Breitbart, a Matt Drudge acolyte, and Ken Lerer, a former P.R. guy at AOL Time Warner, in helping Arianna Huffington, a millionaire and a former anti-feminist polemicist, launch the Huffington Post. Peretti was in charge of innovations that included a click-o-meter. Within a couple of years, the Huffington Post had more Web traffic than the Los Angeles Times, the Washington Post, and the Wall Street Journal. Its business was banditry. Abramson writes that when the Times published a deeply reported exclusive story about WikiLeaks, which took months of investigative work and a great deal of money, the Huffington Post published its own version of the story, using the same headline—and beat out the Times story in Google rankings. “We were learning that the internet behaved like a clattering of jackdaws,” Rusbridger writes. “Nothing remained exclusive for more than two minutes.”