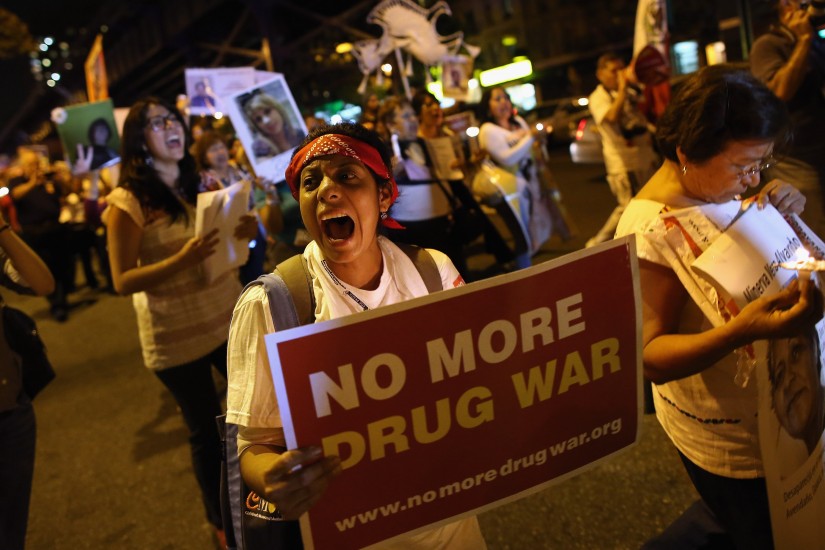 Protesters hold a march calling for the end of the drug war on September 6, 2012 in Harlem.
John Moore/Getty Images
…

If this were another country, without a history of racial domination, one could imagine a different response to police killings, even a multi-racial alliance against warrior policing and mass incarceration….In his acute study The Condemnation of Blackness (2010), Khalil Gibran Muhammad showed that after Reconstruction white sociologists invented a new category: black criminality. Black crime was understood to be different from, and more intractable than, crime by poor whites or immigrants, whose misbehavior could be explained in terms of social causes. ‘White criminality was society’s problem,’ and could be reduced through government policy, while ‘black criminality was black people’s problem,’ reflective of their ‘culture’, if not their biological make-up, and largely impervious to remedy. Black criminality, according to Muhammad, became a ‘tool to measure black fitness for citizenship’, and to ‘shield … white Americans from the charge of racism, helping to determine the degree to which whites had any responsibility to help black people’.

It still is. And so long as most white Americans continue to associate crime – what Donald Trump characterized as ‘the American carnage’ – with blackness, they are likely to see the war on crime as the guarantor of what they feel to be their embattled security, like the equally futile war on terror. Locking Up Our Own is a sobering chronicle of how black people, in the hope of saving their communities, contributed to the rise of a system that has undone much of the progress of the civil rights era. But, as Forman knows, they could not have built it by themselves, and they are even less likely to be able to abolish it without influential white allies, and dramatic reforms in the structure of American society.