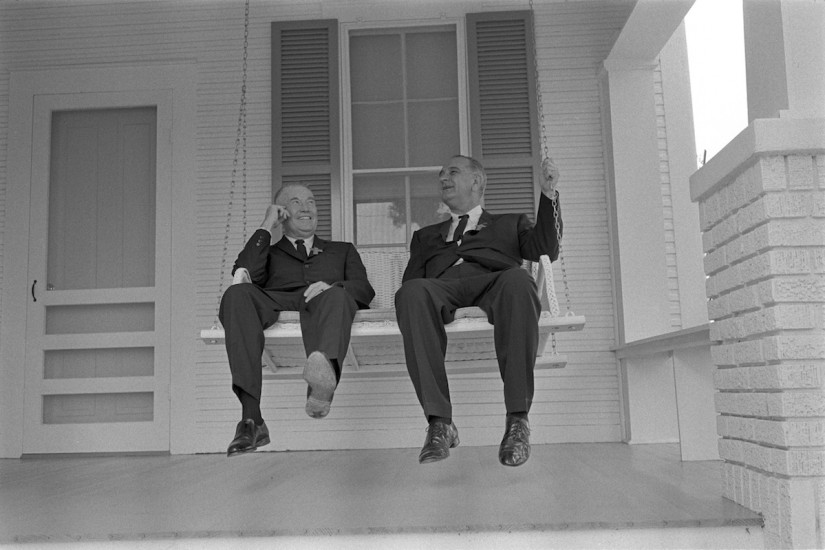 Lyndon B. Johnson and Admiral William Raborn on the front porch of LBJ's boyhood home, 1965.
johnsoncitytx.org
…

I had thought I would have to write only a chapter or two on Johnson’s youth, and wouldn’t have to do much research for it. At the time I started, there were already seven biographies of Johnson in print, and they all related the same anecdotes, which portrayed young Lyndon as a sort of Horatio Alger hero of the Hill Country, smiling and popular, who had risen through ambition and hard work. Wonderful anecdotes, some of them. Poor boy making his way in the world. I thought that, thanks to those books, I already knew the basic story of his youth. Though I lacked enough detail or a sense of what the Hill Country was like, I thought I could provide that detail through some interviews, and that was all I would need to do.

I found the interviews unexpectedly difficult, however—very difficult, in fact. Some of the people who had known Lyndon lived on isolated ranches or farms. I would drive sixty or seventy miles on a highway and then (“Look for the cattle guard on the left”) turn off onto an unpaved track that might go for fifteen or twenty miles. At the end of it would be a house, the only one for miles, and in it a couple (or a widow; there seemed to be a disproportionate number of widows in the Hill Country) who weren’t accustomed to having long conversations with strangers.

The barrier was not simply a shyness that I could eventually break down. There was a kind of reticence, a holding back, in their conversations with me, a laconic quality. There was a real honorableness about them, too. They weren’t going to lie. If you asked them a question, they would always tell you the truth. But they also felt—quite deeply—that it was wrong to say anything derogatory about a man who had become President of the United States. I’d repeat the wonderful anecdotes that were in the other biographies, and the most someone might volunteer was “Well, that’s not quite what happened.” They wouldn’t say what actually had happened, and were very chary about giving me any details. I began to sense a deep reluctance to tell me the whole story, or even the true story—to reveal to an outsider what Lyndon Johnson had really been like as a youth and a young man. Equally disturbing, the more I talked to them the more I realized that it wasn’t just the young Lyndon Johnson I wasn’t understanding; the same was true of the people to whom I was talking. I wasn’t understanding them, either—their culture, their mores—and I didn’t know how to break through.

Part of the problem, I came to realize, was that they had talked to too many people like me. During Johnson’s Presidency, journalists from all over the United States, from every major magazine and newspaper (and a lot of minor ones), had come to the Hill Country, had spent three or four days there (or as much as a week), and had gone home to explain this remote place to the rest of America. Hill Country people had a name for them: “portable journalists.” They basically thought I was a portable journalist, too.

I said to Ina, “I’m not understanding these people and therefore I’m not understanding Lyndon Johnson. We’re going to have to move to the Hill Country and live there.” Ina asked, “Why can’t you do a biography of Napoleon?” But Ina is always Ina: loyal and true. She said, as she always says, “Sure.” We rented a house on the edge of the Hill Country, where we lived for much of the next three years.