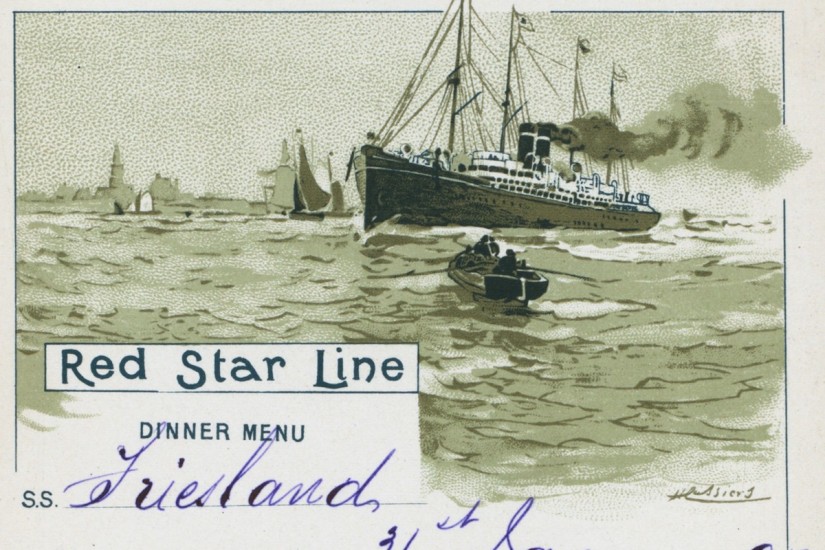 Detail from a dinner menu from the S.S. Friesland, 1900.
New York Public Library
…

I am writing a book about African Americans in 20th century Denmark. During the past few years I followed in their footsteps by visiting Danish cities, towns, villages, islands, a prison, numerous castles, jazz clubs, an educational institution, and the homes and studios where they lived, visited, performed, toured, and studied. A friend suggested I more accurately recreate the experience of the people in my book who lived in the first half of the 20th century, when the only way to get to Denmark from the United States was to cross the Atlantic Ocean by ship. I’d read much of what they’d written about their experiences in letters home, in memoirs, and in one case, in a newspaper column.

They traveled abroad during the Jim Crow era in the United States, and many feared they would face racism and even possible segregation on the ships. Perhaps they were familiar with the oft-told tale of former slave and abolitionist Frederick Douglass’ 1845 crossing. He was almost thrown overboard by some Americans after the captain invited him to make an anti-slavery speech. Elizabeth Stordeur Pryor called Douglass’ voyage “harrowing” in Colored Travelers: Mobility and the Fight for Citizenship before the Civil War. William M. Fowler, Jr. wrote in Steam Titans: Cunard, Collins, and the Epic Battle for Commerce on the North Atlantic that although Douglass booked a first-class cabin, once he was on the Cambria he “discovered that he had been reassigned to quarters in the forecastle, separate from the other passengers, and he was advised to remain secluded there during the crossing.”

I did not worry about segregation during my 21st century transatlantic crossing, but wondered about and anticipated possible microaggressions — slights and condescending comments often based on racial stereotypes. I did not see many images in Cunard’s brochures and website featuring Black people among the passengers. I was educated in predominantly white institutions and worked at similar institutions as an administrator and as a professor, so I was used to being in white spaces. And I live in Wisconsin — one of the whitest states in the nation. I wondered what would my journey be like on the Atlantic Ocean?