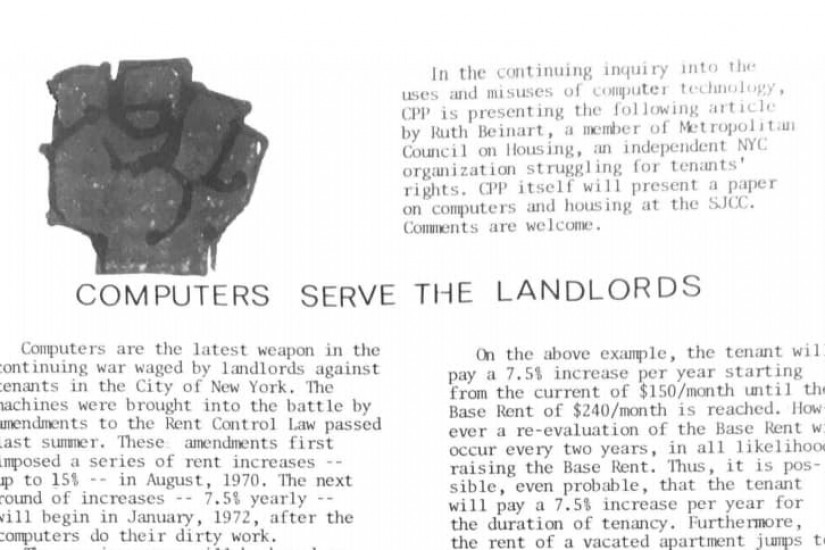 A page from "Interrupt," the newsletter of Computer People for Peace.
https://eli.naeher.name
…

I remember you saying something at one point about a commune. Were you all living together?

It was only a small part of CPP, but yes. In 1971, seven of us who met through the collective started a commune in Brooklyn. Our commune was in an amazing old brownstone with original oak panelling and a big kitchen on the lower level.

We reasoned that it would only take three people working at any one time to support the house and buy all the food and everything, and then the others could be doing movement work—anti-war work or what I got into, which was trying to organize a computer workers’ union.

You tried to organize a computer workers’ union at IBM?

No, this was during the year I took off. We each took six months to a year off to do movement work.

CPP had the idea that if we could organize mainframe programmers and mainframe operators, then we could shut down everything. I worked on implementing that vision, but it was very difficult. The only inroads I remember making were at NYU and a city agency. It was difficult because the workers were well-paid and thought of themselves as professionals.

One of the things that the mainframe era did was to enable women and working-class people to walk into a professional job and earn a decent living. It just required a college education. My division of IBM had a lot of working-class young men who got draft deferments for working there. It was a leg on the rung of the middle class.

Were these programmers receptive to the idea of unionizing?

Programmers were not really interested, but the operators were. Operators were the guys—and 99.9% of them were guys—who worked in the machine room, the mainframe room. They could shut anything down. And being an operator didn’t require a college education. There were a lot of African-Americans who hadn’t been to college and whose consciousness had been raised in the 1960s and 1970s.

But we had this idealistic vision of programmers and operators, together. Today it’d be like a union of… I don’t know what the job titles are now.