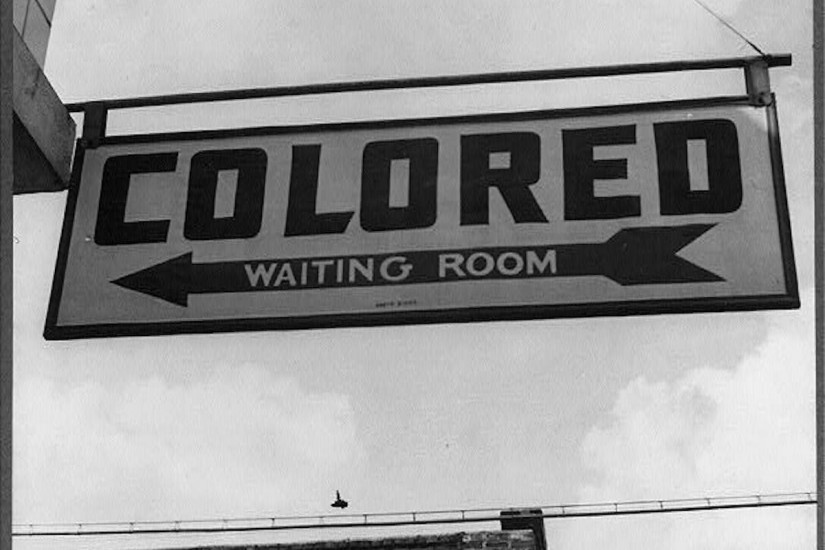 A sign indicating the 'colored waiting room' at a bus station in Rome, Georgia (1943).
Esther Bubley/Library of Congress
…

As Luxenberg points out, the concept “separate but equal” (the phrase the Court used in Plessy was actually “equal but separate”) was hardly a novelty. It had been a customary way to throw out complaints about segregation since before the Civil War. In Plessy, the Court added a gloss that became almost as famous as the phrase itself: “We consider the underlying fallacy of the plaintiff’s argument to consist in the assumption that the enforced separation of the two races stamps the colored race with a badge of inferiority,” it said. “If this be so, it is not by reason of anything found in the act, but solely because the colored race chooses to put that construction upon it.” As Charles Black, a Yale law professor, wrote of these sentences many years later, “The curves of callousness and stupidity intersect at their respective maxima.”

The assumption that separate facilities for blacks—railroad cars, steamboat berths, schools—were not inferior is a good example of the Supreme Court’s formalism in that period of American law. Everyone knew the assumption was false. The Jim Crow train car was sometimes called “the dirt car,” and “colored” schools were often shacks. It was also absurd to claim that the “badge of inferiority” was a black person’s construction. In Dred Scott, the Chief Justice, Roger Taney, had said that, constitutionally, black people were “a subordinate and inferior class of beings,” with “no rights which the white man was bound to respect.”

In Brown v. Board of Education, the Warren Court would cite psychological studies showing that black children are harmed by segregation. That’s not something a nineteenth-century court would have considered appropriate (and some people did not consider it appropriate in Brown). In cases like Plessy v. Ferguson, the Court looked to the text of the statute. If the statute did not prescribe unequal conditions, then, legally, conditions were not unequal.

The Justices in the Plessy case were aware of the repercussions that a robust interpretation of the Fourteenth Amendment would have, of course. Political realities, as always, put a constraint on judicial reasoning. The Supreme Court in the early twentieth century did decide cases in favor of African-American and Asian-American plaintiffs, but it mostly kept its hands off state racial regulations.

When Louis Martinet formed his Citizens’ Committee to Test the Constitutionality of the Separate Car Law, he wrote to Frederick Douglass and asked for his support. Douglass refused. He said he could not see how the case could help things. Douglass was proved correct. The decision was the worst possible outcome, and the one Plessy’s lawyers had feared. It stamped a constitutional seal of approval on state-mandated racial segregation. The case may not have received much press attention at the time, but over the next fifty years it was cited in thirteen Supreme Court opinions.