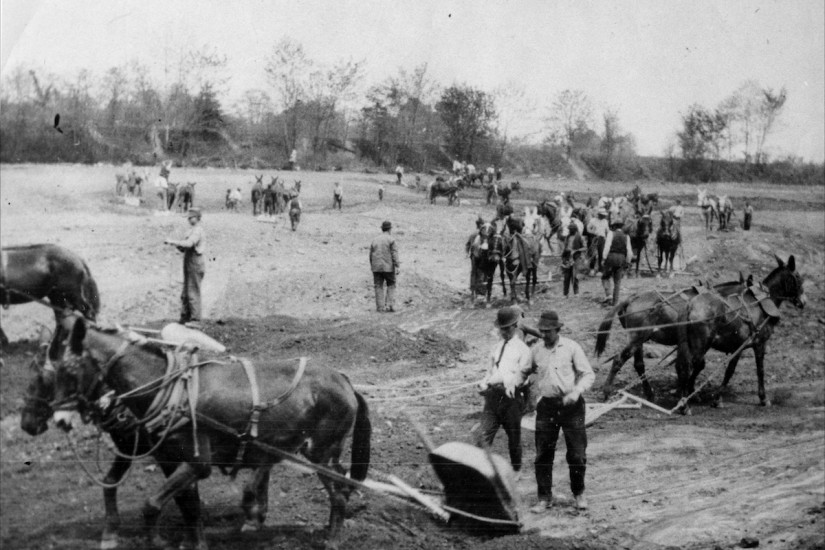 Construction began again in the spring of 1833, with a workforce composed predominantly of Irish immigrants hired for wages by contractors who bid to build different sections of the canal. But labor conflicts became chronic problems, and they emerged primarily from within the ranks of canal workers seeking an outlet for their grievances and some measure of control over their working conditions. At a time when unions were of questionable legality and organizing could subject laborers to charges of criminal conspiracy, canal workers with little leverage over the contractors who paid them might turn on each other violently in fights over back wages. Raising the stakes further still were traditions carried over from Ireland in which workers organized themselves into secret societies that used threats, physical assault, and, on occasion, murder, to drive away competitors.

In January 1834, rumors began spreading along the canal route of downsizing and contractor financial difficulties, and there were actual cases of work crews being dismissed without pay. On January 16, factions of workers from different parts of Ireland began fighting near the western Maryland town of Williamsport, each hoping to drive the other away and thus retain whatever jobs remained for their fellows. The battle, which broke out between Corkonians and Fardowners, who were also known as Longfords, lasted for several days and led to numerous deaths and dozens of injuries before being halted by local militia companies.

More than thirty men were arrested, but the lull in the violence lasted only as long as the militia companies remained in place. When they left, the fighting started again. On January 24, over 700 Longfords carrying guns and clubs marched on a camp of about 300 Corkonians and routed them. The Longfords killed as many as ten men, including a group of five supposedly found shot through the head, and destroyed the shanty housing in which the Corkonians lived. The militia was called out once more, as was the county sheriff. Canal company managers and local militia leaders persuaded the laborer factions to pledge to keep the peace and not to interfere with workers on the canal, with a warning that the militia would drive any faction engaging in future hostilities out of the county.

The workers who had been arrested were released, and some measure of calm was restored. But local residents of Williamsport, terrified by the chaos surrounding them, had pleaded with the Maryland House of Delegates for protection, and the legislature responded on January 28 with resolutions calling on President Jackson to send “such portion of the Military of the General Government as in his opinion may be necessary to protect our citizens and prevent any injury to the public works and property of individuals.” Jackson responded immediately, ordering the Secretary of War the very next day to send “at least two companies of regulars” to “put down the riotous assembly.”