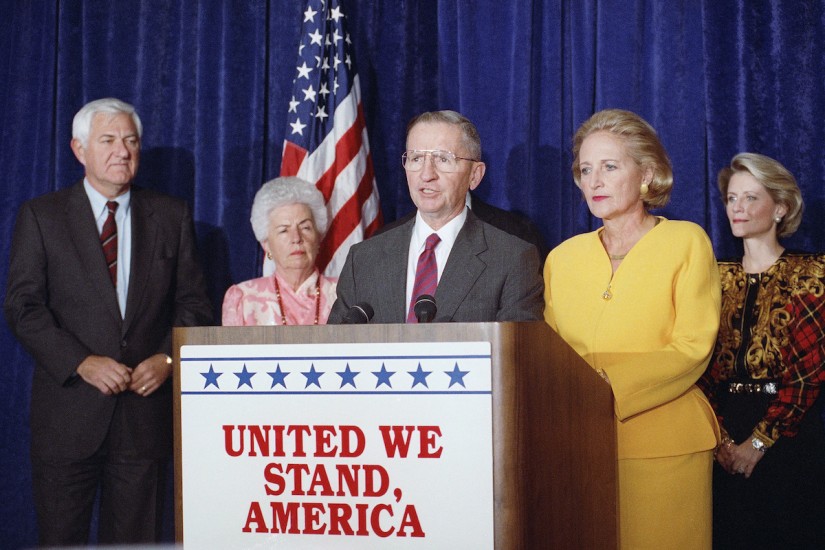 Ross Perot, with his wife Margot, announces that he will run for President on Thursday, Oct. 1, 1992 in Dallas.
AP Photo/Eric Gay
…

While the debate over Schultz ’s possible impact on the 2020 election will continue to rage in coming weeks, more important right now — with a man who has a big ego and a big wallet already in the White House — is to explain what accounts for the growing number of American chief executives who say they can make what seems to them to be a lateral move to chief executive of the U.S. government.

The phenomenon has become very real in the past few years. While Ross Perot was considered a curiosity when he ran as an independent in 1992 and 1996, brand-name business figures no longer seem unusual in presidential politics. In this election cycle alone, Schultz, Michael Bloomberg, Oprah Winfrey, Tom Steyer, Mark Zuckerberg and Mark Cuban have all been floated as potential challengers to Trump. Name recognition, an apparent record of success in business and personal resources were enough for Trump, these candidates seem to say, so why wouldn’t it be enough for them? Trump spent $66.1 million of his own money on his 2016 campaign. For billionaires with a bigger bottom line and a larger sense of themselves, such a price seems a bargain too good to ignore.

But while we only now have a plague of big-ego billionaires in politics, the conditions that gave rise to the trend date back to the 1970s. In the aftermath of Vietnam and Watergate, many voters soured on “experienced” politicians who had betrayed their trust. Liberal Democrats felt President Lyndon B. Johnson had done them wrong when he channeled his political capital away from domestic reform and into a disastrous war in Vietnam. Republicans were likewise devastated when they learned about the ugly underbelly of presidential power as a result of Watergate.

During the next four decades, the “outsider” became the most sought-after identity for presidential candidates. Georgia Gov. Jimmy Carter led the way in 1976 when he made his weak ties to Washington a claim to fame. As his opponents in the Democratic primary boasted of their decades of experience in Washington, and President Gerald Ford campaigned from the Rose Garden, Carter boasted to voters that he was one of them. With Carter’s victory, the message was clear: Being an outsider was in.