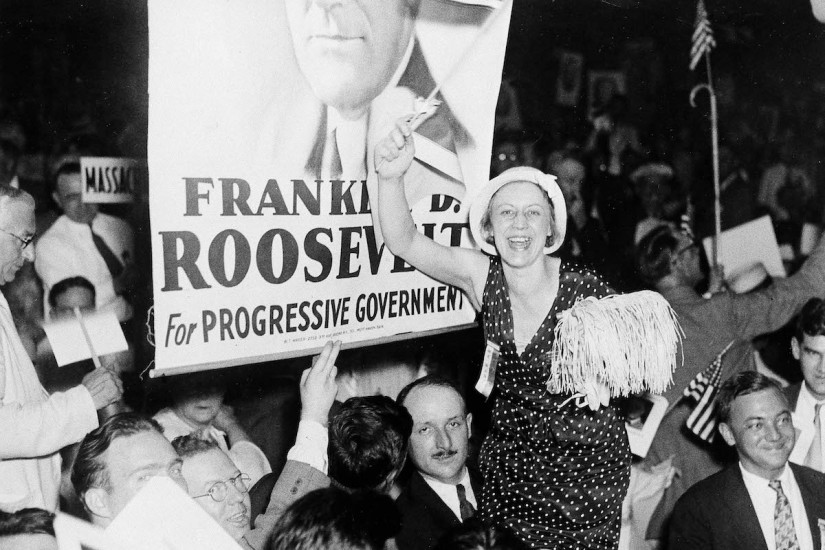 Mrs. Stuart Mills is shown during the 1932 Democratic National Convention during the celebration following Franklin D. Roosevelt's nomination speech.
AP Photo/Ed Widdis
…
The story of an angst-filled Hoover quietly squirreling away funds while lecturing the country about the moral necessity of keeping the banks open is one of the pleasures of Eric Rauchway’s Winter War, a crisp narrative of the four-month interregnum between Franklin D. Roosevelt’s victory in November 1932 and his assumption of the presidency in March 1933. To write a whole history of what is essentially a prelude may seem odd. But Rauchway, who teaches at UC Davis, argues that in the conflict between the lame-duck Hoover and the incoming Roosevelt, we can already see the tension between the New Deal and the opposition to it that would structure American politics for much of the rest of the 20th century.
The New Deal, he maintains, was not a matter of invention and experimentation, as it has sometimes been interpreted to be. On the contrary, it reflected a clear ideological direction—one that American voters had consciously chosen in the fall of 1932. What is more, he suggests that these four months marked a distinctive moment of uncertainty and crisis in American history—a time of panic, anxiety, and political violence, when the basic economic and political structures of the United States were challenged in ways that they had not been since the Civil War. Rauchway presents a Roosevelt for our own polarized age, an act of historical imagination that delivers real insights yet also simplifies a complex period.
The timing of the presidential inauguration was just one of the American traditions jettisoned under the pressure of the Great Depression. The first of the nation’s inaugurations was held on April 30, but thereafter they were scheduled for March 4—to mark the anniversary of the day the federal government began its operations in 1789. This changed with the Twentieth Amendment, which was ratified early in 1933 and moved the inauguration date up to January 20, starting in 1937. Winter War makes clear the problems of such a long transition, certainly in late 1932 and early 1933. The nation was in a state of emergency, but the outgoing president could not take any action, while the new one still did not possess the power to lead.
…
View on The Atlantic
View Connections