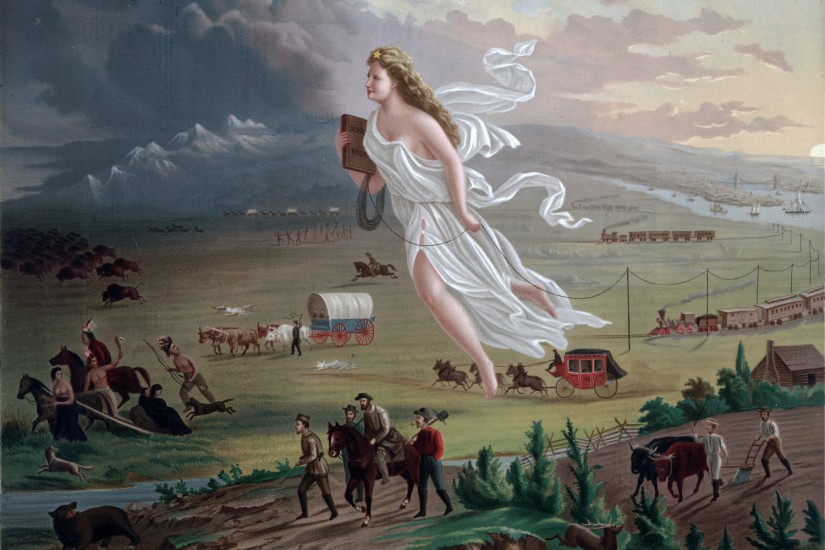 In 1920, a collection of communities on the plains of Iowa and South Dakota celebrated their first 50 years on the prairie with a dramatic historical reenactment of their communities’ origins. They called it the Golden Jubilee Pageant. As a historian, this is one of those archival gold mines, offering revealing glimpses into how these rural settlers remembered nineteenth-century settlement and early interactions with Native Americas.

The play presents a dramatic re-imagination of the communities’ earliest days, celebrating the bravery and perseverance of its founders. Fittingly, the drama begins with much fanfare as embodiments of History and Progress with a legion of attendants process onto the stage. “The debt we owe to the past becomes too soon a debt on paper only and we feel too little obligation of the heart,” History declares, “We players now present our tribute here. With reverence and devotion we are come to turn the page of history back a bit. The pageant’s explicit purpose is to bathe the community in nostalgia—a communal effort to venerate the men and women who preceded them.

While the performance is rife with material for analysis, the second act in particular presents a tidy picture of how these white settlers understood their early interactions with the Native Americans who possessed the land before them. Importantly, the playwright did not pretend that these communities took root in an uninhabited region. He explicitly acknowledged that the white settlers took possession of the land from the Native Americans and wrote a fictional scene to capture the essence of the land exchange that took place. In reality, though, by the time that these communities appeared in the 1870s, the tribes that previously inhabited the lands had either been defeated in the Sioux Wars of the 1860s or moved to even more remote lands.

At the opening of the scene, Native women and children mill about the stage before a band of warriors arrives, giving thanks to the Native deity “Gitchie Manitou the Mighty” for the spoils of a successful hunt. Laden with the bounty of a successful hunt that promises to feed the tribe for many days, the chief calls the community to a time of thanksgiving.

In addition to an abundance of the food, he celebrates, “All our enemies are vanquished. Left us are the fierce Dakotas, Left us and departed westward, fearing well our bows and arrows.” This proclamation establishes “the West” as a site for defeated Native tribes. While the tribe revels in its victory, the Dakotas appear from the West. After a brief skirmish, the chief declares, “Once again we come victorious. Vanquished are the craven cowards. Nevermore will they molest us. Now these fertile hills and valleys evermore will be our portion.” These Native Americans have fought for their land and intend to cultivate it into perpetuity. They will not join the defeated in the West.