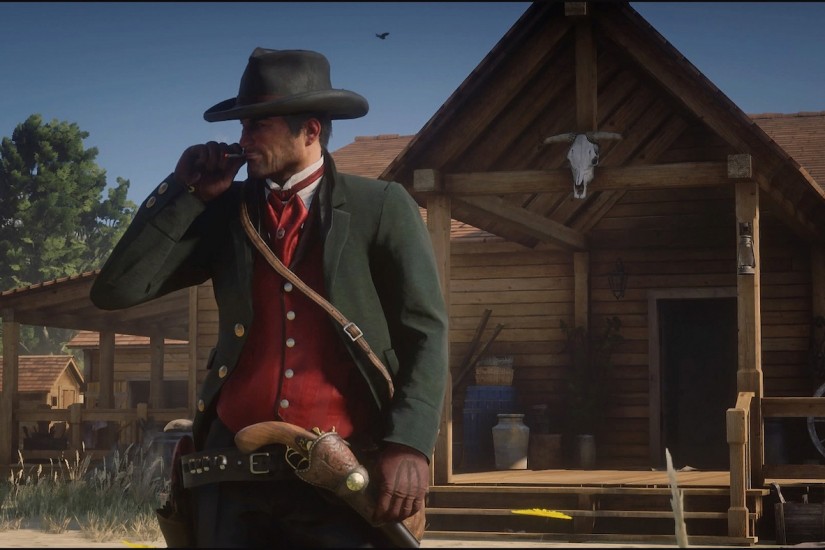 A screenshot of Arthur Morgan, the central character in 'Red Dead Redemption 2' (2018).
flickr.com/snakedrone
…

Red Dead Redemption 2 doesn’t merely depict the brutal racial realities of the 19th-century U.S. At several moments, Rockstar uses the game as a platform to actively condemn white supremacy. At no point is this more apparent than when Arthur encounters a midnight gathering of the Ku Klux Klan, complete with a cross burning. If players mosey around the backcountry at night long enough, they will eventually spot orange flames illuminating the distant trees. Investigate, and Arthur winds up toe-to-toe with a dozen white-hooded Klansmen. Honor system notwithstanding, there’s not a thing in the world stopping Arthur from going full-on Django Unchained on those racist bastards. As players gleefully reported on Reddit, the game actually incentivizes killing the Klan members. Usually when Arthur commits unprovoked assault, murder, and even animal cruelty, his standing plummets, but not if players opt to eradicate the local klavern.

The Klan encounter is randomly generated, so casual players might never have the chance to rain hellfire down on the Klansmen. But Rockstar takes great pains to ensure that gamers don’t miss out on the intended lesson at a few other points in the game. My favorite teachable moment comes in a quest titled “The Iniquities of History.” In this subplot, Arthur finds himself assisting a pitiable old man, Jeremiah Compson, whose farm has just been foreclosed upon.

The bank took everything, Compson explains. He asks Arthur to break into the farmhouse and retrieve some personal effects, including a ledger.

Arthur, being a do-gooder at heart, obliges the seemingly noble request. But after breaking into Compson’s house, Arthur is revolted to discover yet another slaveholding pen, complete with a whip and chains. Worse still, it turns out the ledger is a record of runaway slaves Compson captured and returned to their masters before the Civil War.

Furious and disgusted, Arthur confronts Compson, who embarks on a jeremiad for the ages, lamenting the loss of his profession because of abolition. His “legacy” has been “pissed on,” Jeremiah says. But Arthur won’t have it. “Old man, some jobs ain’t worth savin,’ ” Arthur yells, casting Compson’s ledger into a campfire. Whipped into a frenzy, Jeremiah screams, “That’s my history! Damn you!” and tries to shoot Arthur.

Players are then free to do what they want. As with the Klansmen, killing Compson doesn’t cost Arthur anything. In fact, if the player chooses to kill Compson, the game actually rewards Arthur with a boost in his honor. Rockstar’s lesson—that slavery was, like the quest’s title says, an “iniquity of history” necessitating active measures to make amends—is impossible to miss.