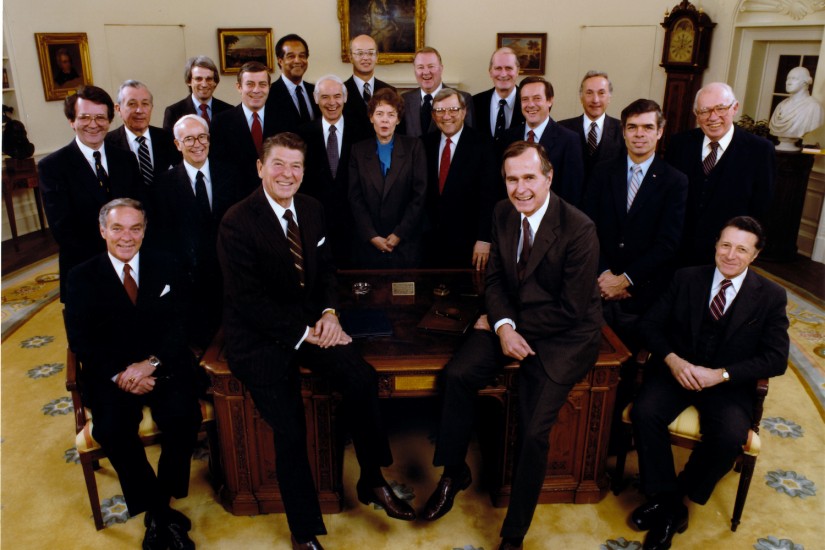 "Class Photo" of the Reagan Cabinet taken in the Oval at the White House in Washington, DC, February 4, 1981.
Michael Evans/Associated Press

When George H.W. Bush arrived in Washington as vice president in January 1981 he seemed little more than a sideshow to Ronald Reagan, the one-time leading man who had been overwhelmingly elected to the greatest stage in the world. Biography after inconclusive biography would be written about Reagan’s two terms, as their authors tried to square the many gaps in his knowledge with his seemingly acute political instincts and the ease with which he appeared to handle the presidency. Bush was invariably written off as a cautious politician who followed the lead of his glamorous boss – perhaps because he assumed that his reward would be a clear shot at the presidency in 1988. He would be the first former CIA director to make it to the top.

There was another view of Bush: the one held by the military men and civilian professionals who worked for him on national security issues. Unlike the president, he knew what was going on and how to get things done. For them, Reagan was ‘a dimwit’ who didn’t get it, or even try to get it. A former senior official of the Office of Management and Budget described the president to me as ‘lazy, just lazy’. Reagan, the official explained, insisted on being presented with a three-line summary of significant budget decisions, and the OMB concluded that the easiest way to cope was to present him with three figures – one very high, one very low and one in the middle, which Reagan invariably signed off on. I was later told that the process was known inside the White House as the ‘Goldilocks option’. He was also bored by complicated intelligence estimates. Forever courteous and gracious, he would doodle during national security briefings or simply not listen. It would have been natural to turn instead to the director of the CIA, but this was William Casey, a former businessman and Nixon aide who had been controversially appointed by Reagan as the reward for managing his 1980 election campaign. As the intelligence professionals working with the executive saw it, Casey was reckless, uninformed, and said far too much to the press.

Bush was different: he got it. At his direction, a team of military operatives was set up that bypassed the national security establishment – including the CIA – and wasn’t answerable to congressional oversight. It was led by Vice-Admiral Arthur Moreau, a brilliant navy officer who would be known to those on the inside as ‘M’. He had most recently been involved, as deputy chief of naval operations, in developing the US’s new maritime strategy, aimed at restricting Soviet freedom of movement. In May 1983 he was promoted to assistant to the chairman of the Joint Chiefs of Staff, General John Vessey, and over the next couple of years he oversaw a secret team – operating in part out of the office of Daniel Murphy, Bush’s chief of staff – which quietly conducted at least 35 covert operations against drug trafficking, terrorism and, most important, perceived Soviet expansionism in more than twenty countries, including Peru, Honduras, Guatemala, Brazil, Argentina, Libya, Senegal, Chad, Algeria, Tunisia, the Congo, Kenya, Egypt, Yemen, Syria, Hungary, East Germany, Czechoslovakia, Bulgaria, Romania, Georgia and Vietnam.

Moreau’s small, off-the-record team, primarily made up of navy officers, was tasked with foreign operations deemed necessary by the vice president.