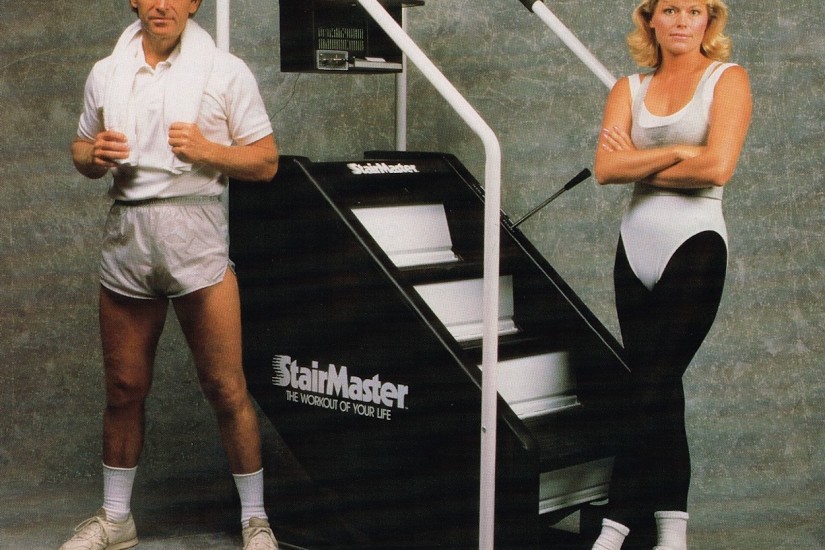 StairMaster 6000 brochure.
Rich Hanson/Medium
…
George Schupp, then a founder of StairMaster, now retired: What would happen is that every morning, probably about 7 or 8 a.m., Jim, myself, and Lanny would all meet out there, because we didn’t have anything to do except commiserate. We’d sit around and brainstorm. Finally, one day we said, “Okay, let’s look at an industry that’s really going good.” And so we decided on the fitness industry.

Lanny talked to his doctor, who suggested that stair climbing is a very good exercise. The only problem is you do as much damage coming down as the benefit gained going up. Damage to your shins and your joints and so on and so forth.

Lanny is a very creative kind of guy. He’s got a satchel full of inventions. So just planting that seed in his mind was about all he needed to go forth with the idea. He started designing in his mind a machine that would climb stairs without the disadvantage of coming back down.

Rich Hanson was working for Nautilus—manufacturers of the strength-training machine of the same name that is largely credited with changing gym culture from one of barbells and weights to one of machines?—?when he saw an ad for the StairMaster in a magazine and knew he had to check out the company.

Rich Hanson, then co-owner and West Coast sales director at StairMaster, now president and co-founder of RealRyder International: When I first visited them in Tulsa and met Lanny, I thought, “Okay, this is one of those guys, you know: the inventor.” He had the inventor look in his eyes—kind of on a different planet than the rest of us. He told me stories about dreaming of doing pullups on the moon and how that led to another of his inventions. Lanny tells the story of how he got the idea for the StairMaster when he was in the Air Force. They were stationed in Italy and lived in a fourth-floor walk-up. No elevator; carrying groceries and those kinds of things up the stairs. And, wow, you know, that’s a pretty good workout!

Ralph Cissne ran a small advertising agency in Tulsa in the 1980s when one of his employees told him he’d heard about a guy working on a new exercise machine. Immediately captivated by the concept, Cissne would eventually manage StairMaster’s advertising and marketing during its formative years.

Ralph Cissne, then director of marketing, now a creative strategist and author: I said, “Let’s call him and go see it tomorrow.” Because when I was in high school, running stairs was what you had to do if the coach punished you.