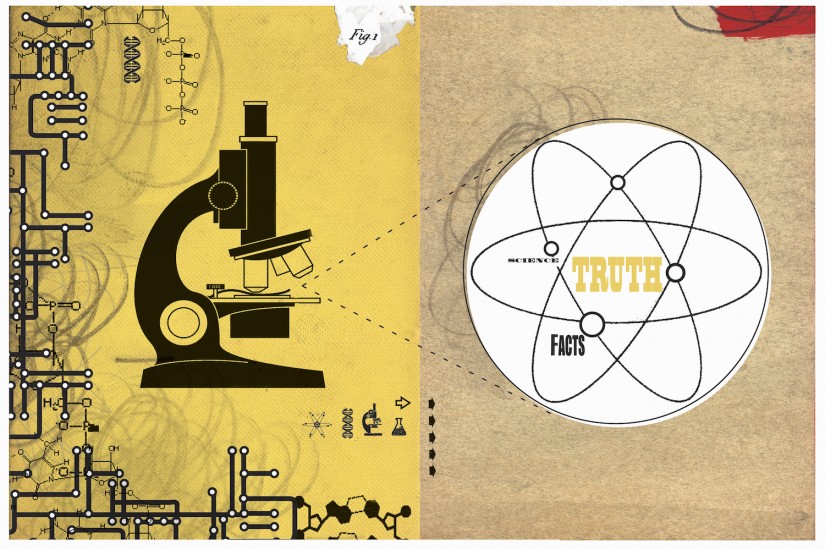 A few months ago, a new meme swept over the Twitter-scape. For a few days, historians dutifully composed 240-character-long correctives about the past. They framed their missives with ASCII art— a bunny holding a protest placard with the accompanying #HistorianSignBunny hashtag.

One of the most widely shared correctives came from Audra J. Wolfe, a historian of science by training, an author and editor by occupation, and a vocal member of a community of historians who use social media as a tool for public engagement. 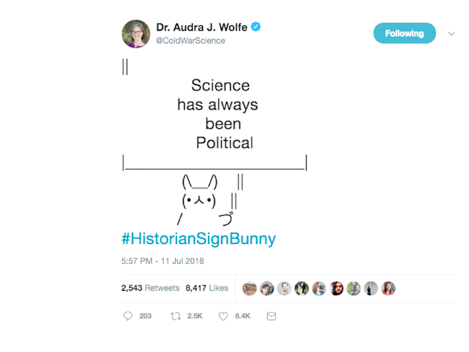 Her simple injunction, just five words long, provoked a multi-day uproar during which scientists, historians, and, of course, less-than-well-meaning trolls responded to her message. Her point is hardly provocative among historians. If anything, it’s banal. Science has been enmeshed in politics for centuries. Full stop.

Some of her critics were hung up on an idealized notion of “The Scientific Method”; they took umbrage with her tweet because of confusion over what “science” is. If one deploys the comically narrow definition — that science represents discovered facts about “The Universe” (e.g., acceleration due to gravity on the earth’s surface is 9.8 meters per second squared) — well, then one might be hard pressed to see it as “political.” But this misunderstands the nature of the thing in question. A more accurate and precise definition: science is the production of reliable knowledge about the natural world. With this definition, dozens of doors open to admitting all sorts of political beasties. Almost every one of those words — production, reliable, knowledge, and natural — is steeped in webs of politics and power.

Some Twitter users protested that Wolfe had missed the point. While “scientists” might be political actors, “science” itself was surely not. As one tweeter insisted, “science itself was designed to be apolitical.” Wolfe patiently replied that any “process” of designing science, with its complex suite of methods, funding structures, laboratories, and so forth, is nonetheless inherently political.

The crux of the misunderstanding regards what scientists actually produce. Science doesn’t produce certainty. It produces consensus. And, by its very nature, this process of making consensus about the natural world — “vaccines are essential tools of public health” or “the Earth is round” — is deeply rooted in politics (whether happening in local school boards or the United Nations). What we know may belong in some arid land of dry facts but how we know has a political dimension. Just ask James Hanson or any scientist trying to counter anti-vaxxers.