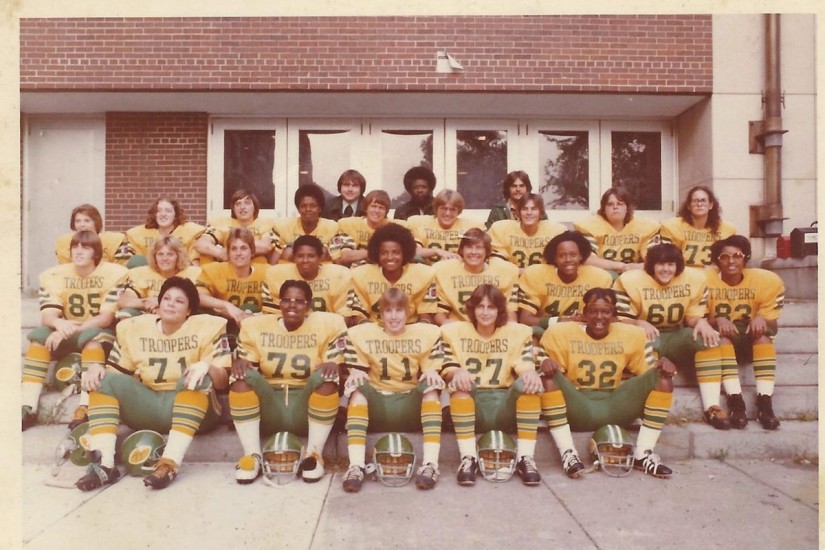 Even though women’s football leagues have existed prior to the passage of Title IX, the belief that women don’t play football continues to persist: At least three semi-professional women’s tackle football leagues exist in the United States (including the WFA). Reporters still write the same stories about the novelty of women playing American tackle football — stories that mention the ponytails sticking out their helmets, that talk about how people don’t think women play the game, that emphasize that they’ll be treated just like one of the guys — but it is the same variation on a story for more than 100 years because for much of the history of the sport of American football, the women’s game was a gimmick.

In 1896, one of the first known football contests between women occurred at Sulzer’s Harlem River Park, playful entertainment before a masked ball for a men’s social club. The men expected something light and gentle, and the players accordingly wore sailor suits and short dresses. But the women came to play. The game got rough. Police eventually arrived to shut it down, fearful that one of the women would get hurt.

Women playing football persisted as a gag. The 1926 Frankford Yellow Jackets, a Pennsylvania-based NFL team that existed for nearly a decade, organized women’s games so as to entertain the crowds during halftime of their games. That sentiment failed to change during the intervening decades: In the aughts, the Legends Football League (formerly the Lingerie Football League) debuted as a pay-per-view alternative to the Super Bowl’s halftime show. The concept was simple: People — presumably men — could pay money to watch women play football in their underwear.

The NWFL’s roots are similar. In 1967, a Cleveland talent agent named Sid Friedman conceived of a barnstorming operation in which a team of women toured the country playing men’s teams. According to the Detroit Free-Press, his idea focused less on football and “more from a show viewpoint.” Basically, Friedman reportedly wanted “a Harlem Globetrotters setup.” At one point, he allegedly proffered Hustler magazine a photo shoot with the league’s Detroit franchise. But like the women who came before them, when women answered an ad to join a football team, it was because they wanted to actually play football. The Troopers began in 1971 as part of Friedman’s Women’s Professional Football League. They were coached by Bill Stout, a former all-city nose guard for DeVilbiss High School in Toledo whose pro football dreams had crumbled. Before he began coaching the Troopers, Stout was a struggling factory worker with a gambling problem. He felt like he was out of options, so he turned to coaching women’s football — which he didn’t take seriously until he saw the dedication and determination of his charges.