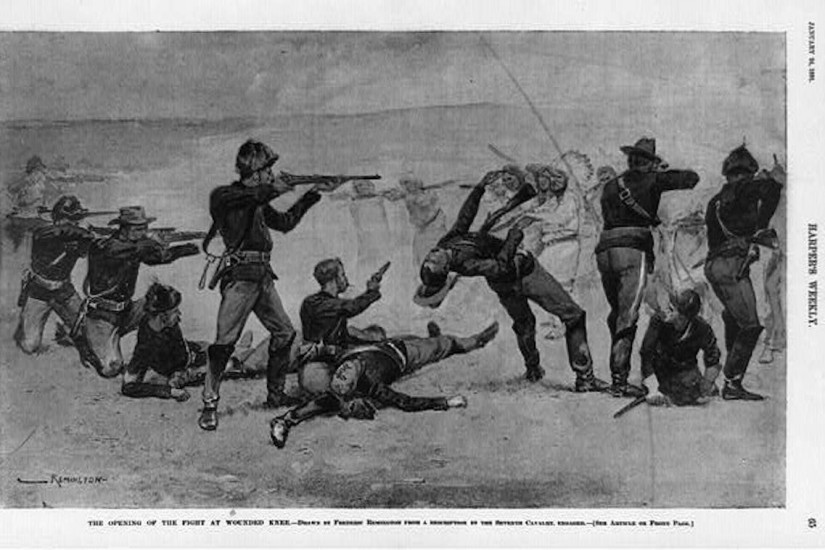 A drawing of the opening moments of the Massacre at Wounded Knee.
Frederic Remington/Library of Congress
…

We have placed men into the office of the Presidency that arguably participated in colonial genocide; consider George Washington, who earned the moniker “Town Destroyer” among the Six Nations of the Iroquois Confederacy by ordering their villages destroyed in total war, or Andrew Jackson’s conduct during the Creek War. Presidents have used the office to support genocide, from Ronald Reagan aiding the Guatemalan government against the Mayans in the name of anti-communism to our present day, bipartisan, pan-administration support for the Saudi campaign in Yemen. We have even had administrations outwardly declare indifference if a genocide was to occur, as when Henry Kissinger informed Richard Nixon that a hypothetical gassing of Soviet Jews was, perhaps, a humanitarian issue. Throughout forty-five Presidents, this country has run the gauntlet of leaders who personified colonialism and imperialism.

Throughout our history, we’ve committed genocide; we’ve aided it, we’ve ignored it, and, of course, we’ve denied it. Now, we can also say we joked about it. While bigoted humor is by no means as evil or as tragic as the bloodlettings that make up our legacy, it is a sign that we have moved beyond the point of ignoring or denying our history to accepting it.

This type of discourse is not new. Most prominently, back in August of 2015, Fox News’ Jesse Watters, a panelist on their program The Five, chimed in on the discussion of then-candidate Trump’s immigration policy as followed: “Listen, I know it’s going to be a Trail of Tears, but it’s a simple plan: protect the border, protect families, protect jobs.” Watters mentioned the Trail of Tears apropos of nothing and even framed it positively. While it took a few years, that vile mindset has finally been weaponized as duel two-hundred-eighty-character shotgun blasts towards a sitting Senator and Presidential candidate at the expense of those who it really harmed.

That isn’t genocide denial. Denialism would be the moments of our history where we pretend that genocide only started in the Twentieth Century with Ottomans or with Nazis or when we believe the civic myths of the Indian Wars. This is a step beyond. We’ve reached the point where the murderous legacy can be used as a joke by the sitting leader of the country that committed the crimes.