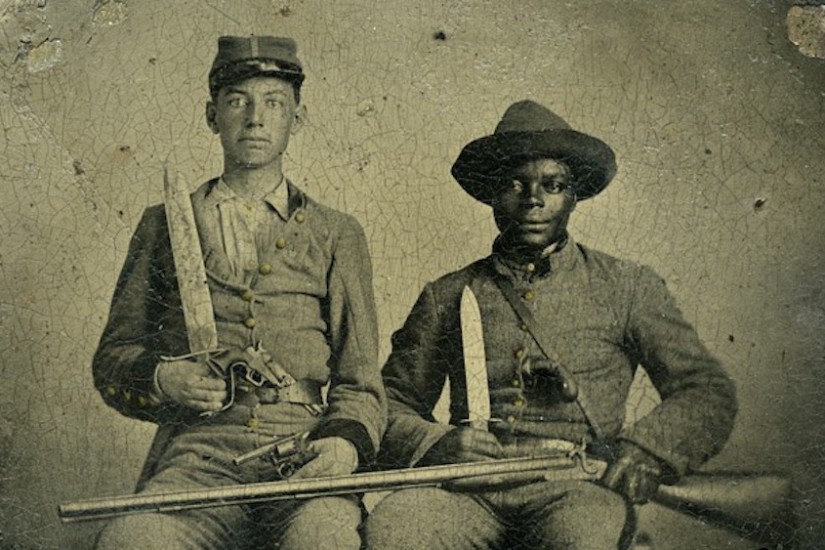 The yearbook photo that appears on Virginia Governor Ralph Northam’s personal page, featuring a man in blackface and another in a Klan robe, looks to me like a modern update of a familiar image from the Civil War, of a Confederate soldier from the slaveholding class posing with his body servant. The history of the Civil War pairing clarifies the meaning of the Northam scandal.

Perhaps the most famous of the soldier-slave photographs depicts Sergeant Andrew Chandler and his uniformed body servant, Silas Chandler. Andrew served in the 44th Mississippi Infantry in the Army of Tennessee from 1861 to 1863. Camp slaves such as Silas were expected to oblige their masters’ every need, including by preparing food, tending to horses, and carrying personal supplies during long marches. Silas likely experienced many of the challenges of military life in camp, on the march, and even, on occasion, the battlefield.

Camp slaves performed essential tasks in an army that was always outnumbered and short on supplies. The historical record makes clear that they were not, on the whole, happy participants in the war effort; they routinely committed acts of disobedience, including running away to join the Union army. But the photograph of Andrew and Silas—likely taken early in the war, when enthusiasm was at its height—reinforced the widely held belief among white Southerners that slaves supported the Cause. The presence of men such as Silas reassured Confederates that invasion, battlefield loss, and even emancipation itself could not sever the strong bonds of fidelity between master and slave.

Indeed, the photographs and stories of camp slaves occupied a central place in how former Confederates reimagined antebellum society following surrender in the spring of 1865. The Silas photo was part of a larger Lost Cause narrative that emphasized Confederate generals as Christian Warriors, a united home front, and especially the loyalty of the black population. Popular lithographs such as Prayer in “Stonewall Jackson’s” Camp, for example, showed the famous general leading a prayer service during the war, his men listening attentively and using their swords as tools of prayer. Alongside Jackson stands his “loyal” slave.

Confederate veterans waxed poetic about their former camp slaves in their memoirs and later in the pages of Confederate Veteran magazine. Carlton McCarthy spoke for many when he wrote, “Never was there fonder admiration that these darkies displayed for their master.”