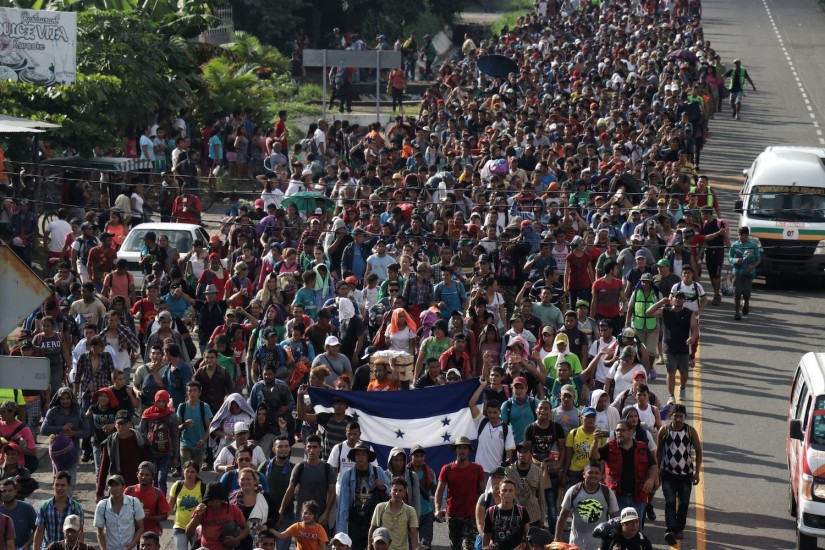 Central American migrants passing through Ciudad Hidalgo in Mexico on their way to seek refuge in the United States, October 21, 2018.
Iván Sánchez/Associated Press
…

President Trump talks about the migrant caravan as if it were an attempted invasion. In reality, Honduras and Central America have paid an enormous price precisely because of US policies. The dire situation in Honduras right now is shaped by the drug market, and the world’s largest consumer of cocaine is the United States. As early as 1975, Honduras was being used as a staging area by the Cali Cartel, led by the Rodríguez Orejuela brothers (the powerful rivals of Pablo Escobar, the head of the Medellín Cartel). After their arrest, they told prosecutors that cocaine left Colombia by plane and landed in San Pedro Sula—the city from which the caravan originated—and from there went on to Miami.

Through the 1980s, the Colombian cartels transported their cocaine to the US mainly by boat, across the Caribbean to Florida. But when the US Drug Enforcement Administration ramped up inspections in those waters and began seizing more and more shipments, the land route to the United States from Central America through Mexico (with the help of Mexican traffickers) became a better alternative. And when the civil wars in El Salvador and Guatemala ended (in 1992 and 1996, respectively), that route was used more and more, since criminal organizations prefer to steer clear of conflict zones.

But the end of those conflicts also created another opportunity for the cartels. During the civil wars, many parents in El Salvador, in order to keep their sons from becoming either guerrillas of the Farabundo Martí National Liberation Front (FMLN) or regular army soldiers destined for slaughter, sent them to the United States. Abandoned to their fate in Los Angeles, marginalized by American society, some of these youths formed the maras, street gangs of young Central American immigrants who banded together to defend themselves from the African-American, Asian, and Mexican gangs already active there. Thus were born extremely violent, close-knit groups such as Mara Salvatrucha (MS-13) and Mara 18 (also known as the 18th Street gang or Barrio 18), whose names came from the LA streets that were their headquarters.

Once the Central American civil wars had ended, the US government, eager to rid itself of this problem, sent back to their native lands thousands of young men. Having left as boys, they returned as gangsters.