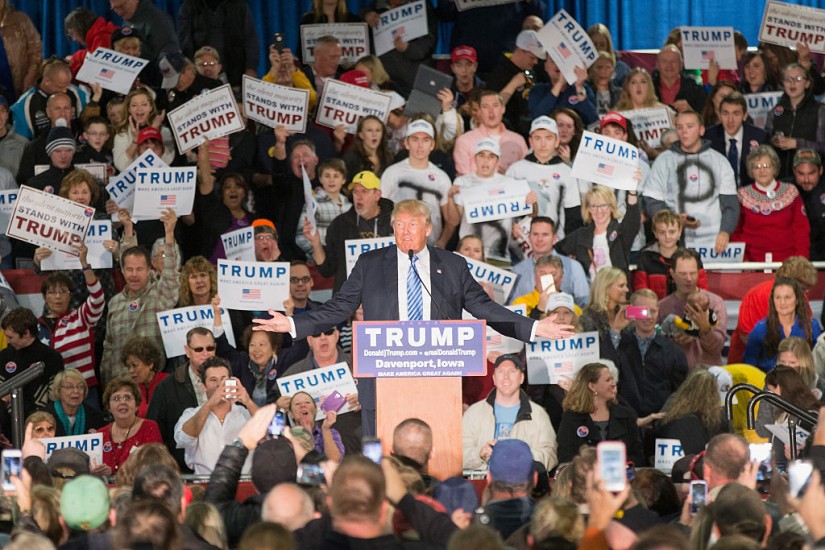 Trump at a campaign rally in Iowa.
Scott Olson/Getty Images
…

In American history too, the great egalitarians, like William Jennings Bryan, have often been cultural chauvinists; the great cosmopolitans, like Alexander Hamilton, usually indifferent or hostile to economic equality.

We have observed a very different pattern over the past 40 years, of course. But one thing that seems to have happened in the Trump era is that this familiar pattern has suddenly become unstable. The component parts of the American electorate seem in flux. The wealth and power of the country are moving into the column of the party supposedly of redistribution; disappointment and despair into the party supposedly of enterprise.

The Second Klan of the 1920s originated in the Deep South, then rapidly spread after 1919 into the then most dynamic regions of the country: New York and Long Island; Detroit and Pittsburgh: Philadelphia and the anthracite Belt; the Pacific Northwest and Los Angeles. The Trump vote, by contrast, is concentrated in the least dynamic areas of the country. The 2,600 counties won by Trump produce only about one-third of America’s wealth. Trump did well where people suffer most from diabetes, and where opiate overdoses take most lives. The Second Klan offered a defiant cultural counter-revolution; the Trump vote could be seen as the despair of defeated people—something more like the William Jennings Bryan candidacies.

If this analysis is correct, then the appropriate source of concern for the American future is not Trump’s duped voters, but the politician who did the duping—and the story to tell is not that of the remorseless rise of fascism in the people, but the failure of popular institutions to resist and contain the ambitions and impulses of a charismatic authoritarian without a popular mandate.