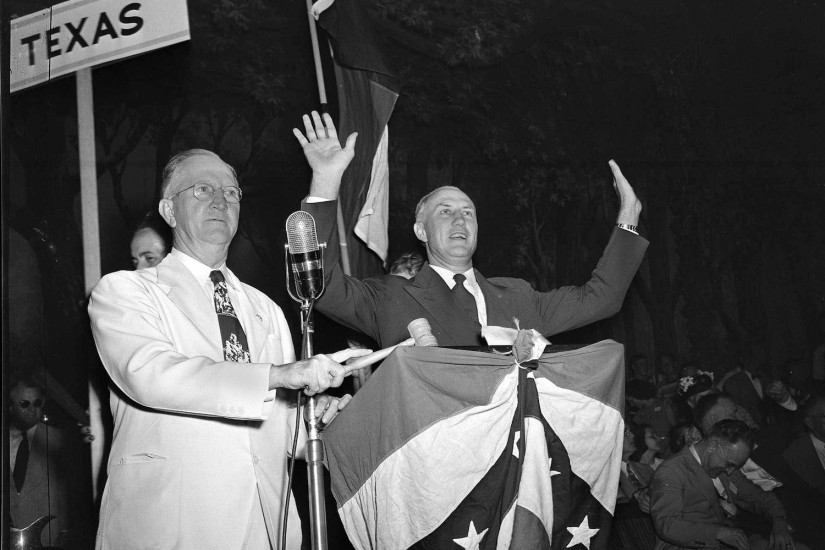 Strom Thurmond (R) reacts to applause from Dixiecrat delegates in Birmingham after being nominated by the Dixiecrats for the presidency, July 17, 1948.
Associated Press

As long as there has been a US government, white Southerners have done their best to dominate it. They shoehorned the three-fifths clause into the Constitution, expanded slavery beyond the banks of the Mississippi River, started an armed rebellion to preserve that evil institution, created terrorist outfits like the Ku Klux Klan to sabotage Reconstruction, installed an American version of apartheid, and then fought the modern civil-rights movement with bombast, filibusters, and violence. In the 1960s, when a Democratic president and Congress finally passed laws that nullified the most blatantly racist statutes in the South, resentful whites below the Mason-Dixon Line began migrating to the Republican Party, which betrayed its Lincolnian roots in return for a sizable new constituency. The Mississippi voters who elected Cindy Hyde-Smith, a latter-day admirer of the Confederacy, to the US Senate last fall were merely extending a long, benighted tradition.

Yet in that same region often lurked another set of impulses that today’s progressives might cheer. In 1877, during a nationwide railroad strike, a Memphis newspaper asserted that the federal government should be “wrested from the hands of those who manipulate it to their own aggrandizement and to the oppression of the masses.” It was only one of many newspapers to champion the cause of organized labor. Three decades later, every major piece of legislation that President Woodrow Wilson signed to regulate big business—from a major anti-trust act to an eight-hour day for railroad workers—was crafted by a Democrat from one of the states that barred most African Americans from voting. Later, when Franklin Roosevelt sat in the White House, such landmark New Deal achievements as Social Security, the minimum wage, and protections for labor organizers would not have become law without the backing of explicitly racist lawmakers from Dixie.

The authors of two new books—David Bateman, Ira Katznelson, and John Lapinski in Southern Nation: Congress and White Supremacy After Reconstruction and Devin Caughey in The Unsolid South: Mass Politics and National Representation in a One-Party Enclave—take up this apparent contradiction and show how it helps to explain why the region switched from being the stronghold of one party to the base of its adversary.

Both books also come to a similar conclusion: that most white voters in the South, as well as the politicians they elected, were fine with egalitarian economic policies in the late 19th and early 20th centuries so long as they didn’t threaten to disrupt the Jim Crow order.