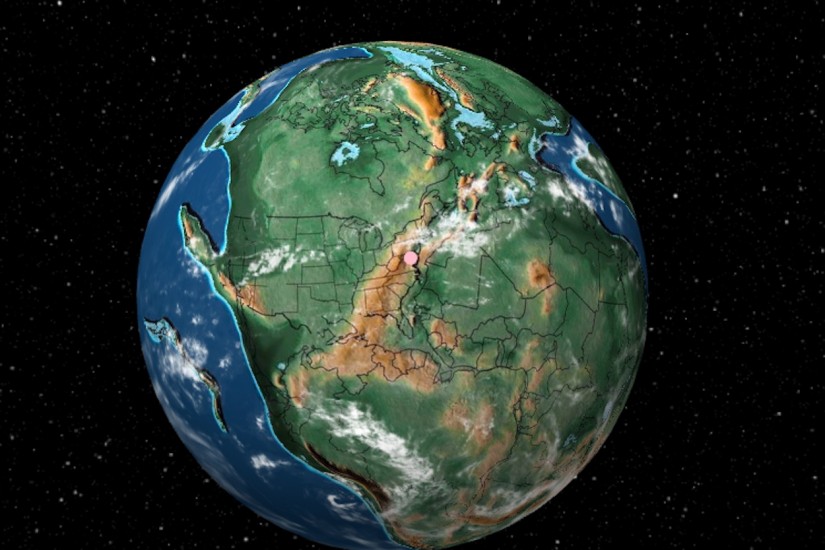 Ancient Earth, the tool behind this millennia-spanning visualization, is the brainchild of Ian Webster, curator of the world’s largest digital dinosaur database. As Michael D’estries reports for Mother Nature Network, Webster drew on data from the PALEOMAP Project—spearheaded by paleogeographer Christopher Scotese, the initiative tracks the evolving “distribution of land and sea” over the past 1,100 million years—to build the map.

Users can input a specific address or more generalized region, such as a state or country, and then choose a date ranging from zero to 750 million years ago. Currently, the map offers 26 timeline options, traveling back from the present to the Cryogenian Period at intervals of 15 to 150 million years.

According to Gizmodo’s George Dvorsky, Ancient Earth includes an array of helpful navigational features, including toggle display options related to globe rotation, lighting and cloud coverage. Brief descriptions of chosen time periods pop up on the bottom left side of the screen, while a dropdown menu at the top right allows users to jump to specific milestones in history, from the arrival of Earth’s first multicellular organisms some 600 million years ago to early hominids’ relatively belated emergence around 20 million years ago.

To switch from one time period to another, you can either manually choose from a dropdown menu or use your keyboard’s left and right arrow keys. Start at the very beginning of the map’s timeline, Michele Debczak advises for Mental Floss, and you’ll see the planet evolve from “unrecognizable blobs of land” to the massive supercontinent of Pangea and, finally, the seven continents we inhabit today.

Fast Company’s Jesus Diaz outlines several insights revealed by Ancient Earth: 750 million years ago, for instance, Midtown Manhattan was situated at the center of a giant icy landmass. As the description on the side of the map explains, “Glaciers may have covered the entire planet during the [Cryogenian Period], the greatest ice age known on Earth.” Flash forward to 500 million years ago, Debczak adds, and New York City pops up as a tiny island in the southern hemisphere, while London, still part of Pangea, appears almost directly adjacent to the South Pole.

“I'm amazed that geologists collected enough data to actually plot my home 750 [million] years ago, so I thought you all would enjoy it too,” Webster writes in a comment on Hacker News.