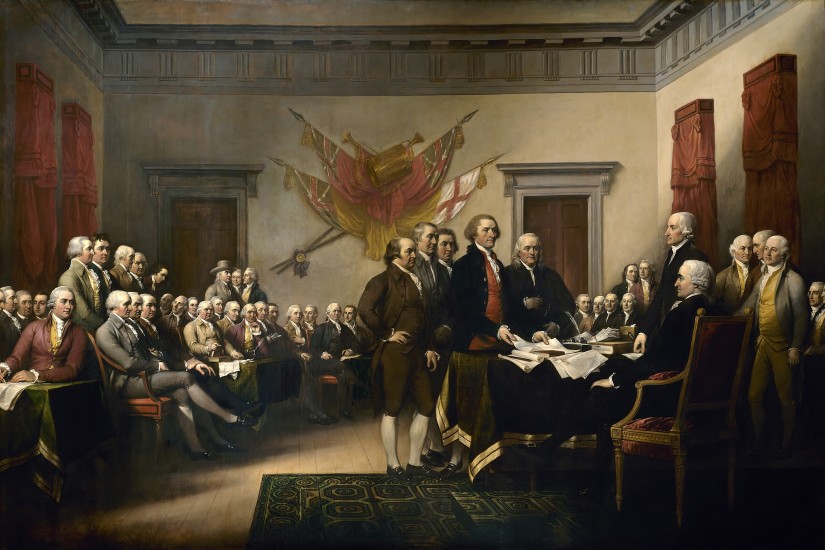 Painting of the room and people present when the Declaration of Independence was signed, by John Trumbull.
Wikimedia Commons
…

History is after all only a pack of tricks we play on the dead,” Voltaire once quipped. The Founding Fathers had their own pack of tricks: they turned their backs on the past. If they had meekly inherited the faith of their fathers, they would have written a constitution establishing Christianity as the national religion. They did not. Nearly every American colony was settled with an established religion; Connecticut’s 1639 founding document explained that the whole purpose of government was “to mayntayne and presearve the liberty and purity of the gospell of our Lord Jesus.” In the century and a half between that charter and the 1787 meeting of the Constitutional Convention lies an entire revolution, not just a political revolution but also a religious revolution, as Frank Lambert, a historian at Purdue, argued in his 2003 study, “The Founding Fathers and the Place of Religion in America.” Far from establishing a religion, the Constitution doesn’t even mention God. At a time when all but two states required religious tests for office, the Constitution prohibited them. At a time when most states still had an official religion, the Bill of Rights forbade the federal government from establishing one.

The Constitution and the Bill of Rights were controversial when they were written and they’ve been controversial ever since, but Article VI and what is known as the Establishment Clause of the First Amendment have been controversial in the last half century because of the Supreme Court’s 1947 decision in Everson v. Board of Education, which reaffirmed the Fourteenth Amendment’s extension (or “incorporation”) of the Establishment Clause to the states and, citing both Jefferson’s Virginia Statute and Madison’s Remonstrance, interpreted the Establishment Clause to mean that the Framers intended there to be a “wall of separation” between church and state: “Neither a state nor the Federal Government can set up a church. Neither can pass laws which aid one religion, aid all religions or prefer one religion to another.”