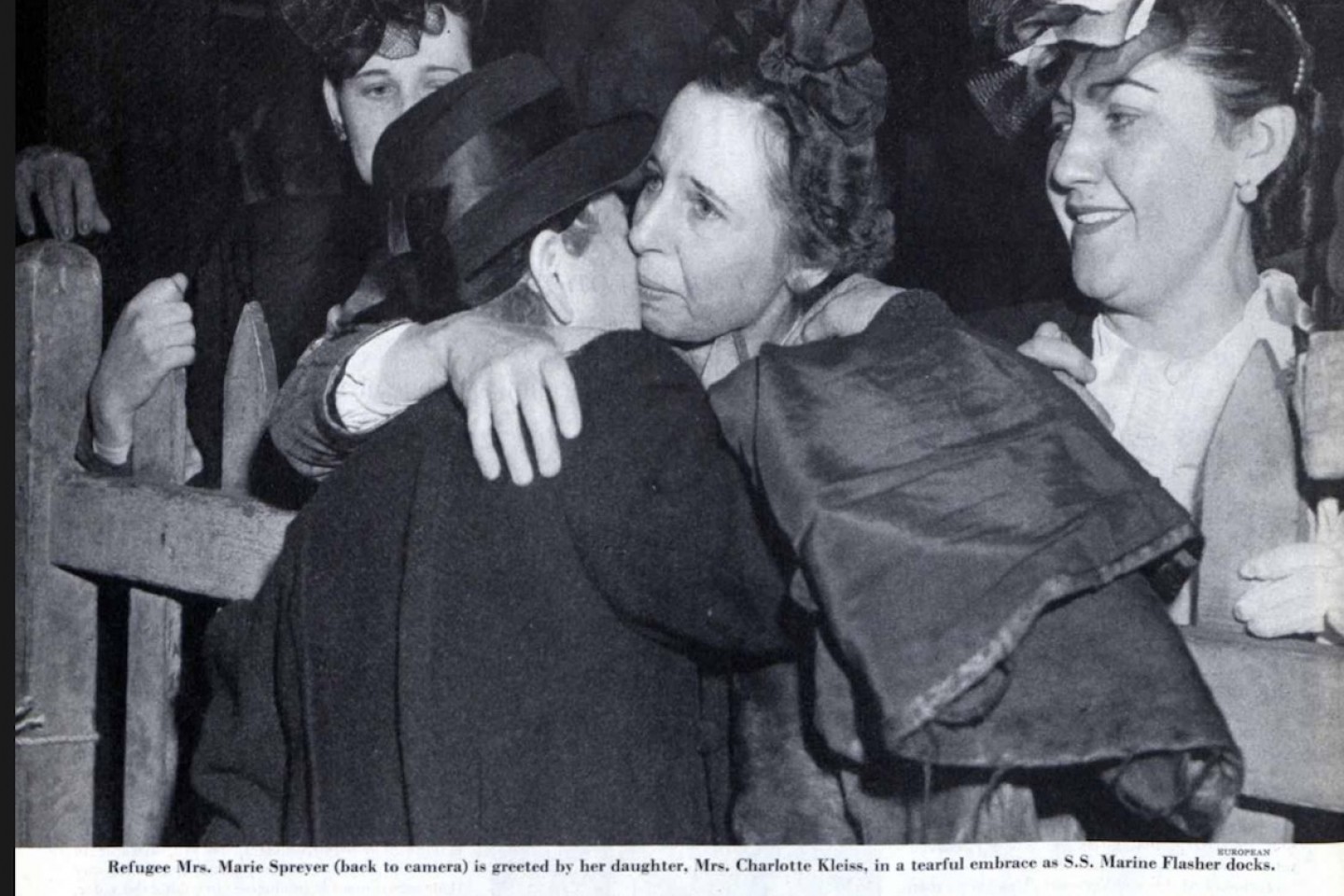 “Refugee Mrs. Marie Spreyer (back to camera) is greeted by her daughter.”
Saturday Evening Post

In recent weeks, we’ve seen reports of newsroom cuts not only among the old guard of print papers, but also among digital upstarts like Buzzfeed. The history of journalism is often framed as a kind of declension narrative – a dropping off from past glories, a decline from a golden age.

But what did that supposed golden age really look like? Earlier this year, I decided to start reading through each issue of the Saturday Evening Post from 1949, in chronological order. Often associated with the cheerful nostalgia of Norman Rockwell’s cover art, the Post was perhaps the most influential periodical of mid-20th century America. It also claimed to be the oldest: the editors frequently mentioned their publication’s descent from the Pennsylvania Gazette, which first appeared in 1728 and was later published by Benjamin Franklin. (As is often the case with such claims, the direct link to Franklin is tenuous at best).

Today, the magazine is mostly remembered for its covers and for its short stories, which included works by F. Scott Fitzgerald, Zora Neale Hurston, and Truman Capote. But I was more curious about what the day to day contents of the magazine looked like 70 years ago: the letters to the editor, the news updates, even the advertisements. These made for striking reading. As January brought news of Theresa May’s failed Brexit vote, I was reading about plans for rebuilding a post-World War II Europe. And as the border wall and refugee policy became recurring features of the news cycle, I was digesting for the most part very different – but at times eerily familiar – takes on immigration from seven decades ago.

What follows is a tour through the issues of the magazine that appeared seventy years ago this month, in February of 1949.

One of the first things that struck me was the advertising. Much of the messaging is comically old-fashioned. Take the Mercury car advertisement from the February 12th issue (“Imagine getting 17, 18, 19 miles and up!”), or the ad for Kraft Cheese describing a “high-quality, complete protein.” Not to mention the ad trumpeting a “filling” raisin pie that boasted of its high caloric content!

More surprising was the significant number of ads that went the other way, speaking directly to contemporary concerns. Here’s one, for example, that portrays the mobile home as a tiny house-like “solution to the housing problem.”

In the magazine’s opinion pieces, it was fascinating to see just how old some contemporary political talking points are. Witness the anti-Truman editorial from February 5th, which defended “trickle down” economics and attacked the minimum wage as a slippery slope toward socialism.

Henry Cabot Lodge’s article “Does the Republic party have a future?” proved to be oddly poignant, given the present state of affairs. Lodge argued that although “the GOP has been presented to the public as a rich man’s club and as a haven for reactionaries,” the Republicans still had a chance to become a “party of progress.” Lodge writes that “the political words ‘left,’ ‘right,’ and ‘center’… apply only very infrequently to modern American politics.” He celebrates the collaborative aspects of a “living two-party system” and says the loss of collaboration between two parties would be “tragic.”

More familiar, perhaps, in this age of sponsored content, is the sneaky way that the ethos of the magazine’s advertisements seems to weave its way through the editorials. The February 19th issue, for instance, featured a two-page spread about how “Nowhere is America's bounty better displayed than in the shopping center of your town... every store, every business on that street is a living symbol of plenty--and of democracy.... every store across this land retails democracy.”

In many of the issues I’ve read so far, there is a marked focus on immigration and refugees fleeing post-war scarcity in Europe.

The January 29th issue, for instance, includes a long feature entitled “They Do Anything to Get Into the U.S.A.” The piece, which bills itself as “the confessions of an American visa officer,” explains the difference between “quota” and “non-quota” visas, and the many “excludable classes,” which, the author notes, “cover everything from idiots to anarchists.” He adds, somewhat shockingly to our sensibilities today, that “a person is charged to the quota of his birth, except in the case of certain Asiatics, who are charged to their racial quotas regardless of where they are born.”

The visa officer relates a story about one particular individual he encountered at the border. “I remember Tony, a volatile Italian, who had jumped ship and entered the United States illegally some twenty years before, and turned up in Montreal to make legal entry. I asked him how come he and his American wife had children fourteen and fifteen years old, yet their marriage certificate was dated only the previous month. With much gesticulation, Tony told the story of how, in the process of getting square with the immigration authorities, he had gone to his priest for proof of his wedding and had learned the awful news that he had mistaken the license for the ceremony.”

We never do learn if Tony actually gets in or not.

In the end, the most striking thing about my time in the pages of the Saturday Evening Post was not what the pages revealed about American life in the winter of 1949. It was what they hid. The vision of America promulgated in the magazine that year was optimistic and expansive, but also deeply exclusionary. Frantic op-eds saw Communists lurking behind initiatives (like a federal minimum wage) that now seem utterly benign. Advertisements and articles assumed a uniformly white readership in a country that, in 1950, was home to over 15 million African Americans. Fifty-five of the articles published in February 1949 were written by men. Only four were by women.

None of this is necessarily surprising. But it is a striking reminder that the Golden Age of American journalism – at least where revenues, readership, and prestige were concerned – had problems rivaling those of today. Enormous fissures lurked behind the post-war façade of cheerful uniformity. Misinformation and divisive rhetoric flourished. And manipulative advertisements – like the ones pushing “doctor-recommended” cigarettes for lung health – proliferated.

As we look backwards to a bygone age of print journalism, it’s worth remembering how far we’ve come, as well as what we’ve lost.