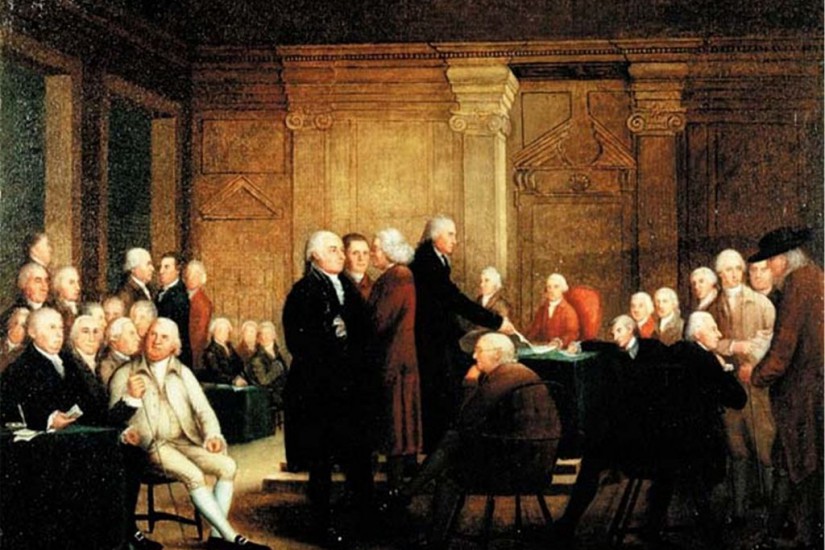 Submitting the Declaration of Independence to the Continental Congress (June 28, 1776)
Edward Savage and Robert Edge Pine/Library of Congress

Only a few days after Tax Day, many Americans still have Uncle Sam on their minds. Though the vast majority of citizens and non-citizens pay some form of federal taxes—Income, Social Security, Medicare tax, or otherwise— few seem aware that the origins of the federal tax system reflect the labyrinthine relationship among race, wealth, and slavery during the Revolutionary War era.

Whereas many are likely familiar with the U.S. Constitution’s 3/5th clause that apportioned “representatives and direct Taxes” among the states according to “the whole Number of free Persons, including those bound to Service for a Term of Years…[and] three fifths of all other Persons,” few are aware of efforts undertaken a decade prior–at the outset of the Second Continental Congress–to launch a colorblind yet pro-slavery federal tax proposal. Such a narrative should compel us to ask questions about the racialized nature of entrenched intergenerational wealth today and our current tax system’s role in perpetuating such problematic realities.

By attempting to adopt a colorblind yet pro-slavery federal tax policy as the first federal tax program, those who were present at the Second Continental Congress sought to sidestep the apparent contradiction between the reality of Black enslavement and the lofty ideals of universal freedom enshrined in the Declaration of Independence. The 56 white male delegates attending the Second Continental Congress in Philadelphia in the spring of 1775—at least a third of whom enslaved African children, women, and men— understood that conversations about federal tax policies were really debates about the sectional geopolitics of U.S. slavery. And in fact, these early deliberations demonstrate that colorblind white supremacy should not be periodized exclusively as a distinctly modern technology of the U.S. racial state following de jure Black enslavement and Jim Crow segregation but rather constitutive of the types of politics that birthed the nation itself.